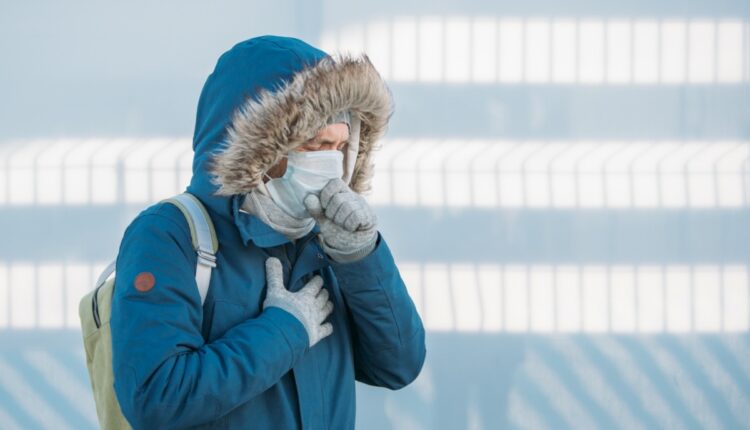 We all want the coronavirus pandemic to be over, and it can be hard to tell how close, or how far, we are from the finish line, what with confusion about boosters, new variants and possible winter surges. Here to provide some level-headed advice that can save your life is Dr. Ashish Jha, Dean of the Brown University School of Public Health, who appeared on Dr. Radio Reports hosted by Dr. Mark Siegel on Sirius XM. Read on for 5 life-saving tips—and to ensure your health and the health of others, don’t miss these Sure Signs You’ve Already Had COVID.

Siegel mentioned that he’s “a little worried” now that we’re headed into colder months “that we’re starting to see” a rise in cases, even in highly-vaccinated places like Vermont. After all, COVID is a respiratory virus. “You are absolutely right,” said Jha. “And I wish people paid more attention to the point that you are making—respiratory virus that spreads more efficiently in colder, drier air, what we have here in New England and the northern half of the country—and obviously it spreads more efficiently when people are spending more time indoors, also a feature of the winter. So from that perspective, I expect case numbers to go up again. Now, how much are we going to see a major spike? I’m pretty confident when you look predictions are hard here, but pretty confident that we’re not going to see a major spike in New England because it’s very, very vaccinated set of states. And so we’ll see a little bumps here. We might even see some places and here’s where the Vermont story gets interesting because Vermont has seen a spike in cases, but it’s largely, if you go into the communities and the counties where they’re seeing the spikes, they’re largely in the few counties of Vermont, which are not super-well vaccinated. And so you have Delta, not super well vaccinated counties, and you have colder air, boom, those counties are gonna are going to see infection spread. I am very worried about the Upper Midwest, Great Plains states, lots of places with low vaccination rates, cold air, cold weather. I’ve worried that they may have a tougher winter. I’m hoping New England is going to get through this without major spikes.”

Virus Expert Said This is What Our Future Could Look Like

What does our future look like? “I do think we’re going to have probably annual boosters for this thing. I don’t think we’re going to need boosters more often than that. I’d be very surprised. My sense is that the third dose will provide a degree of protection that will be long lasting, certainly to get you to an annual booster—look, both Moderna and other companies are working on a single shot of both that you will give you both a flu vaccine and a booster at the same time. That would be lovely. But I think vaccines are with us for a while for this virus—the virus is going to become endemic and it’s already moving towards that. And we’re going to have to figure out how to live with it. It will not cause 700,000 deaths the way it has in the last 18 months. But it will be a serious virus for us to manage and deal with. And that means mitigation efforts like improving indoor ventilation, ongoing kind of use of testing, in high-risk situations, making sure that vulnerable people are boosted. This is something we’re going to be managing for a while until we really get to a very different stage. So I think we’re not that far from coming out of the acute emergency phase of this pandemic. But we’re going to get into kind of a more chronic phase that’s gonna have—it’s gonna take a lot of work to manage in order to keep infections and deaths to an acceptably low number.”

RELATED: What Taking a COVID Booster Does to Your Body

Virus Expert Said Here’s When to Get Your Booster

“Our messaging on boosters has been a mess,” said Jha, “and that’s too bad because boosters are an important part of the vaccine regimen. It may end up being that we don’t even call it boosters in the future. We just say, this is a three shot regimen, and you need your third shot in order to be complete. But that all said, um, let me give you kind of where I think we are on boosters are aware of what the data suggests. If you got Moderna or Pfizer, if you’re in a high-risk group, older, chronically ill have chronic diseases or in a high exposure industry, and you’re six months out, you need a booster monitor, Modrna and Pfizer. You need a booster six months out. If you’re in any of those groups. And a lot of people in those groups, J&J if you’re two months out, it doesn’t matter what group you’re in. You need a boost. So 20-year-old healthy person who got a J&J you need a second shot.”

RELATED: Stop Doing This or You’ll Get Obese, Say Studies

Virus Expert Said This About the “Delta Plus” Variant

“I have been saying for several months that I think it is highly unlikely, not impossible, but highly unlikely that we’re going to see another variant that becomes, that dominates and takes over Delta. You know, in the last week, the UK has seen this bump in a large bump in cases because of Delta plus, which is, has these extra couple of mutations. And there is some concern about whether that’s going to become a problem in the us. The two things I would say about that one is we’ve seen Delta plus pop-up in India, and then it sort of faded away. And then we’ve seen Delta plus pop-up in other parts of the US and has not taken off. So I think we have to keep our eye on this. I don’t think any of us should be cavalier, but if I, at this moment, mark, based on everything, I know, I think Delta is going to be the one that’s going to be with us for a long time. And it’s going to be very hard for another variant to displace it. And let’s hope it’s very hard because something else would have to be even more contagious in order to display Delta. And gosh, we know we don’t need that.”

RELATED: The One Sure Sign You May Have Alzheimer’s

Jha is a “huge fan” of rapid tests. “I’ve pushed folks in administration. We’ve got to get more of these rapid tests out there and publicly available. And then, you know, people talk about masking and often they raised the question that, well, you know, shouldn’t, we still be asking people to mask up and large indoor gatherings, and I’ll tell you, I wouldn’t be very, very, very comfortable being in a large indoor concert. If everybody was vaccinated and everybody had had a negative antigen test, I don’t need people to be mashed up. Even if everybody had a negative antigen test that day. And if most people were vaccinated, that would make a huge difference. So I think we need an off-ramp for asking everybody to be wearing masks, indoors and antigen, rapid antigen tests are really, really important.” So stock up on a few rapid tests, get vaccinated and to protect your life and the lives of others, don’t visit any of these 35 Places You’re Most Likely to Catch COVID.

The post Virus Expert Just Issued This “Worried” Warning appeared first on Eat This Not That.

5 Bankrupt Restaurant Chains That Have Been Revived This Year