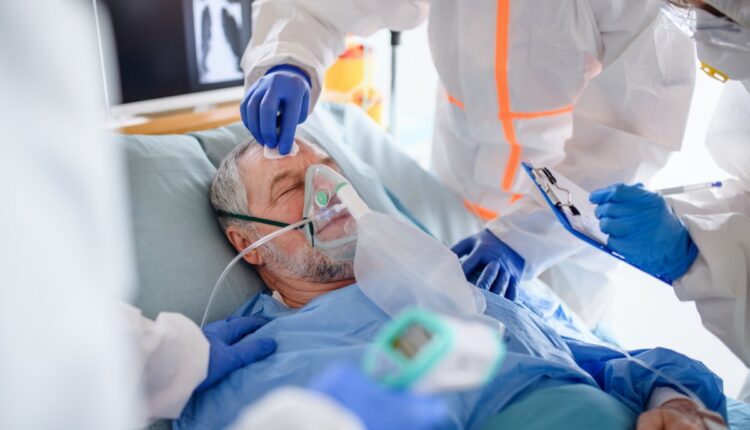 The U.S. is averaging roughly 70,000 coronavirus cases and 1,400 deaths a day—numbers that are lower than September but would have been staggering pre-COVID. So why are so many people acting like COVID is no big deal anymore? “A lot of us are confused. A lot of us want to believe it’s done. And over that June time period that we went through, where psychologically we ended the pandemic—unfortunately the virus didn’t end it as we planned,” said virus expert Michael Osterholm on his podcast yesterday. “Ultimately, this virus, as I have said, time and time again, is a leaky bucket virus. It can, and it will take advantage of any lapse in protection,” said Osterholm. Read on for 6 life-saving pieces of advice he shared—and to ensure your health and the health of others, don’t miss these Sure Signs You’ve Already Had COVID.

So things are looking OK right? Cases are going down in the USA? “Unfortunately I’m still seeing more clouds on the horizon,” said Osterholm. “And while I’m sure some will say that this projection falls right in line with typical bad news, ‘Mike talk,’ I think it’s supported by the global trends we’re seeing play out since August when the world was reporting more than 4.5 million cases a week. We’ve now found ourselves in a valley for seven consecutive weeks. We saw cases drop, falling to just under 2.8 million at the time of last week’s episode. And as of this last week, we’re back up approaching almost 3 million cases, deaths are also growing with just under 50,000 reported in the past week.” That’s an increase, not a decline.

Virus Expert Warns These Countries are in Trouble

It’s clear that “Eastern Europe is still the current regional hotbed,” said Osterholm, but “Europe’s challenges aren’t exclusive to the Eastern half of the continent, a handful of countries in the west, including Belgium, Denmark, Germany, Ireland, and the UK have also been reporting growth. Each of these countries have vaccinated at least 66% of their entire population with Belgium, Denmark, and Ireland actually sending it nearly three and four residents fully vaccinated. Of course, if you look at the number of COVID deaths in these places, which remain relatively low compared to the previous case surgeries, you can clearly see that vaccines are having a major impact. Still the virus is making an impact.” As for the USA? Read on….

Virus Expert Said This is the State of the USA

“If you look at the U.S. as a whole, there’s no denying that we found ourselves in a much better spot than we were in July, August, and the first half of September,” said Osterholm. “Since the height of the surge, we’ve seen cases and hospitalizations cut in half and deaths are clearly on the decline. It’s a marked improvement. It has to feel a lot better in a lot of places. At the same time… our levels remain well above what we saw this past summer prior to Delta’s arrival. At that time, we were reporting less than 12,000 cases a day, hospitalizations dipped below 17,000 and daily deaths dropped to under 200, the least activity we’d seen in this country since some of the earliest days of the pandemic. So we still have a ways to go to get back to our pre-Delta baseline. Nonetheless, the declines are real and fairly widespread with 40 states right now, contributing to case decreases over the past week…the declines include many of the Southern Sunbelt states that were hit hard by Delta, along with states in the East and the Southeast. In addition to the state of Minnesota in the Midwest, we’ve seen Wisconsin, the Dakotas are now reporting big declines.” Eight states are in trouble, however—keep reading to see which ones.

Virus Expert Said COVID is Bad in These US States Currently

Despite some declines, “still, we have eight states where the per capita case rates are more than double the national average, which sits at about 21 cases per a hundred thousand residents, Alaska tops the list with nearly 100 cases per a hundred thousand population, a number that would place it among the top 10 countries in the world with the highest case rates, if in fact, Alaska were a country,” said Osterholm. “Other states where case rates remain elevated are located the Mountain West, including Montana, Idaho, Utah, and Colorado. We’re also keeping our eye on a handful of states reporting recent case growth, like Washington state, New Mexico and Utah. But my primary focus continues to be on places like L.A. and New York City, which have both yet to report any spike in cases with this Delta surge. However, as of Tuesday, there were still at least 38% of L.A. County residents and 34% of New York residents who had yet to be fully vaccinated. If we saw the virus really heat up in either of those places, we could easily move away from our current trajectory. Remember what’s happened in Europe. Remember what’s happened in these countries where they appear to have very high levels of protection, a sense of moving beyond the virus only to have it returned.”

Virus Expert Said Here’s How to Spot the Next Surge

“When we look at where we’re at today and the risk for a future surge in any one given region in the country, it all comes down to one simple question. How many people are susceptible to the virus infection in that area? How many?” asked Osterholm. “And this has been a challenge for us to understand. We know today that if you look at the total U.S. population of 329.5 million people, that 57.4% or 190 million are fully vaccinated, 42%, 139 million are either unvaccinated or partially vaccinated. And today we know that partially vaccinated people still are quite susceptible to infection. If we look at those people who could be vaccinated right now, meaning not the kids, which hopefully that’ll change soon, but those who are in the categories approved as of today, there are 63 million people who are eligible to get vaccines, but haven’t done. So when you look at that, that’s a sizable number of people. Now, some of those people are going to be protected from having been infected before. And some of the people who have been vaccinated are not likely to be protected yet because of waning immunity. So when you put these two together over time, the question becomes how many people are really susceptible in your community. How many people in your community today are susceptible because while having been vaccinated, they have had sufficient waning immunity that they are now susceptible, not only to infection but illness and maybe even severe illness, how many people in your community have not been vaccinated, but had a previous COVID infection that now is protecting them for some period of time, at some level that we’re still not clear about.”

“I don’t want to dampen anyone’s hopes for the future. We will move on from this virus,” said Osterholm, though “how we’ll move on yet, it’s still unclear to me, but I also don’t want people to become reckless. And to think that somehow basically, no matter what we do, we’re not going to be impacted again. I already see healthcare systems in a sense, breathing a sigh of relief. They’ve now gotten through the worst. Not only has the eye of that category five hurricane passed them by, but even now the outside wall seems to be gone. That’s not true. So at this point, I will just say that from a national perspective, things can, and hopefully will continue to get better, but just know in some locations that will not be the future, at least for a period of time. And in many locations, we could still see substantial activity occurring. So get vaccinated, and to protect your life and the lives of others, don’t visit any of these 35 Places You’re Most Likely to Catch COVID.

The post Virus Expert Just Issued This Worldwide Warning appeared first on Eat This Not That.

If You Live Here, You’re in Danger, Virus Expert Warns