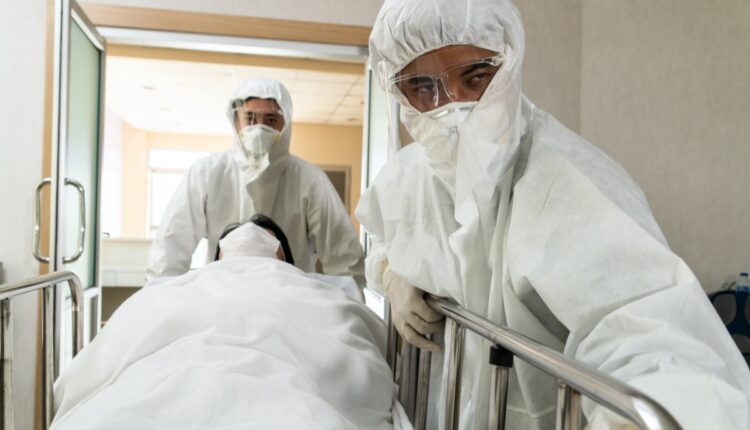 Coronavirus cases, after the Delta surge, were going down in America, which had many Americans thinking the worst was over—but this week, they plateaued, leading experts to wonder, might they go back up? Especially with the winter months ahead? Concerned, Dr. Ashish Jha, Dean of the Brown University School of Public Health, answered questions about how to keep you safe. Read on for 5 essential points—and to ensure your health and the health of others, don’t miss these Sure Signs You’ve Already Had COVID.

“The good news has been that the Delta wave really did peak at the end of August, early September and has had a nice, steady decline down peaking at about 150 to 160,000 infections,” said Dr. Jha. “It is calmed down to about 70,000 and then over the last week, really for the first time since that decline began, we’ve seen a real plateauing—we’ve the infection numbers have been about 70, 75,000 seven day moving average  over the last seven, eight days. And it is possible that it is just a pause before declines further. I suspect it may not be. I suspect that we may be plateauing at a reasonably high level, or we could even see infection numbers start climbing back up again.”

RELATED: Warning Signs You Are in Danger of Alzheimer’s

“What do I think is going on?” Jha asked himself. “What’s going on is the weather. In the Northern half of the country, it’s getting pretty chilly here in New England. It was in the thirties when I woke up this morning and this is what we expect in early November. And obviously it is only going to get colder. And we also know by the seasonality of coronaviruses, generally not just” COVID “but other coronaviruses that they really take off in October, November, December, those are the most active months for human coronaviruses. And so I think what you have is seasonality weather, people spending more time indoors running up against highly vaccinated populations. So, whereas last year, between October and November, we saw this huge acceleration of infections. I don’t think that’s what’s going to happen. We are going to see a plateauing.” Read on to see his second point—about where cases are most likely to rise.

“I think we’re going to see a split,” said Jha. “In New England, the states are very, very highly vaccinated with 70% of the population fully vaccinated. You’re going to see more vaccinations coming online as kids get more vaccinated. I think New England is going to stay relatively flat or might even decline further despite the weather. In the Great Plains states, in the upper Midwest where vaccination rates are lower, in both already case numbers are higher and I expect more concerns in terms of what’s going to happen in the next couple of months. Again, I don’t think we’re going to repeat the performance of the fall and winter of 2020, just because there’s so much more immunity in the population, but I worry that there are states in the US that still are not out of the woods and may face some difficult months ahead.”

“Global vaccinations are continuing,” said Jha. “China has administered about 2.2 billion doses. India hit the 1 billion mark recently. Much of the world is kind of cooking along. The big problem of global vaccination remains Africa,which has less than 5% of its population fully vaccinated, about 7, 8% with at least one dose. And we have all got to do a lot more across the world from high-income countries like the U.S. and Europe to India, which is now starting to get to a point where it’s starting to have more vaccines than people….I’m optimistic about global vaccinations in 2022, but we still have work to do, especially on the continent of Africa, but some other lower income countries as well.”

The post Virus Expert Just Issued Concerning Warning appeared first on Eat This Not That.