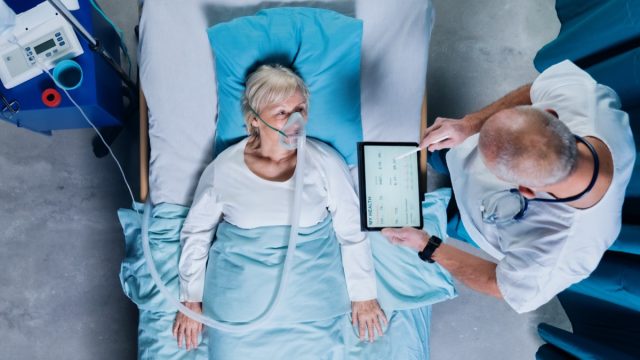 With COVID-19 cases rising and officials alarmed by the recent surge in places like Minnesota, virus expert Michael Osterholm, director of the Center for Infectious Disease Research and Policy at the University of Minnesota, warned this pandemic won’t be over anytime soon, on MPR News. So how can you stay safe? Read on for 7 essential pieces of advice—and to ensure your health and the health of others, don’t miss these Sure Signs You’ve Already Had COVID.

As much as we want this pandemic to end, Osterholm says it’s here for quite awhile. “I do know that this virus is not going to leave us anytime soon. I do have real concern about the variants. What does that mean? How dynamic this virus transmission is what is going on right now with the white- tailed in this country where we have evidence now that a large proportion of the 25 million white-tailed deer in this country have gotten infected from humans. Are we going to see new variants develop in that animal population or other animal populations and spill back into humans? We don’t know. And so I think the challenge we have is just keeping an open mind and understanding that as we share this information with the public, we have to put all the qualifiers on it. What do we know? Well, we do know that vaccines make an incredible difference in who lives and dies. They make an incredible difference in what happens in our ICU’s. And again, listening to the opening of this segment right now, I can’t say enough about the people who are up so much to work day in and day out in these ICU. It’s remarkable. I mean, they’re as much heroes as anybody could ever imagine. So we don’t know, though, a lot of things about when will this virus possibly see new variants develop? When will we understand whether there’s durable immunity? I want to know is my booster that I got a month ago going to protect me six months from now? I don’t know, and what’s going to happen globally. I don’t know that either, but I can tell you, we’re going to continue to see lots of transmission for the foreseeable future. And we can either decide we have to deal with this virus, or we can decide we’re done with it. But if we do the latter, I promise you, the virus will remind us. It is not done with us.”

Medical experts say getting a booster has become increasingly important in fighting off COVID-19 and Osterholm is encouraging everyone to get one. He says, “I think the other issue to note though, is as you pointed out, is that this one of the reasons we want people to get boosters is that as time goes on, there is surely some waning immunity that’s occurring 6, 8, 10 months after the initial series. And so to minimize the risk of breakthrough cases in that group, we still want people to get boosters.” He adds, “I can tell you right now that boosters when given within days already show increased protection back to that original level that one ones had when they had the original two dose series with either the Pfizer or Moderna vaccine or the one dose that they had with the J & J vaccine. So you surely do recapture that protective effect from the vaccines, the challenge we’re going to have, and we just have to be straightforward and say six months from now, we’ll find out, we’re hopeful that in fact, protection will be longer lived than that, but, you know, hope’s not a strategy. And so again, this is one of those, what I call evolving science moments, where we study, we learn, we implement, we study, we learn, and we’re going to be doing that with these vaccines. But in the meantime, there’s no reason not to get the vaccine because of waning immunity. That’s a very important point.”

Osterholm says, “nobody wants to necessarily get ‘natural immunity’ from infection. And the reason for that is of course, the obvious: you want to survive the infection. In Minnesota right now the number of deaths is a real challenge. But in addition, we see an increasing number of people who are developing infection, who then go onto develop long COVID. This complicated chronic fatigue syndrome, like the picture that is really a challenge for many people and their health status. So I think from that perspective, we surely don’t want people to get infected, but if you do get infected, what is your protection? And the data are really becoming increasingly clear that there is some protection. So we should acknowledge that and, and appreciate that for a period of time, you do have protection. But what we’ve also shown is that protection wanes also. And in fact, in several studies, now the data are clear that those who were infected and then get at least one dose of additional vaccine actually have a much longer and more protective period than those who are infected only. And then at risk of reinfection. So the bottom line message is good, I’m glad you survived. I hope you don’t have long COVID, but that definitely you should still get vaccinated.”

Was Lifting the Travel Ban a Good Idea?

With Minnesota numbers rising and certain European countries going into lockdown again, Osterholm says of the new travel guidelines, “one of the problems in dealing with COVID is it moves so quickly that you may embark upon a new public policy that is responding to what was happening yesterday or last week only to see it change this week. The challenge is right now Europe and the United States are the two hottest spots in the world. And so the question becomes is that the right time to make that move? I can’t say that it is or isn’t, but I can say that something we have to be mindful of. I think the challenge we’re having also is even within the United States right now some of the lowest rates we’re seeing anywhere in the country, we’re in those Southern Sunbelt states that got hit hard in July, August, and September. And as we’ve seen with this Delta variant and some locations or major spikes in cases, and then very significant reductions that seem to stay low. Minnesota is part of the upper Midwest model, where we actually had increasing cases in late September to early to mid October. Then the numbers plateaued and started to come down, everyone breathed a sigh of relief, and then only to see these numbers jump way high again. And this is what we’ve seen. In Europe in terms of the United Kingdom, that same model. Last point, I think that to address the European issue, these countries that are seeing severe challenges right now, Germany, Central Austria, they’re at vaccination levels 10 to 20% higher than we have here in the United States and specifically in many counties in Minnesota. So if you can imagine the challenges that they’re having right now, think what that bodes for here in Minnesota, in terms of what we could expect over the days and weeks ahead.”

When Will the Surge Stop in Minnesota?

Osterholm says, “I have some colleagues who have answers to when things will happen and not happen. I also tend to suggest you need to be careful of that because they also have a bridge to sell you. We don’t know, we have to be honest about that. What will happen? I can’t explain to you why the case occurrence in the upper Midwest or for that matter what we’re seeing in the four corners area is different than what we saw earlier in the summer in the south. I still can’t explain to you why New York city and LA have not lit up at all with the Delta surge, although that may be changing based on data just in the last couple of days. So one of the things we do know though, whenever a surge occurs, whenever case numbers go up, precipitously, how, whatever the pattern will be, the one thing that makes a difference in how high that surge gets, how many cases occur is what is your level of vaccination? So vaccination doesn’t necessarily mean that the surge starts. It doesn’t mean it stops, but it has everything to do with the impact that that surge has in your community.”

Pandemic of the Unvaccinated

Osterholm has publicly said this is a pandemic of the unvaccinated and talked about that with MPR. “Well, it’s in part leading to that, but we have to, again, emphasize that right now you have an 11 fold increased risk of becoming a case. If you’re not vaccinated, you have up to a 20 fold increased risk of being hospitalized, seriously ill and dying if you’re not vaccinated. So that still is a very critical part of our pandemic.”

The post Virus Expert Issues Warning of “Real Concern” appeared first on Eat This Not That.

“Health Cures” That are a Waste of Money

Over 60? Don’t Ever Say This to Your Doctor