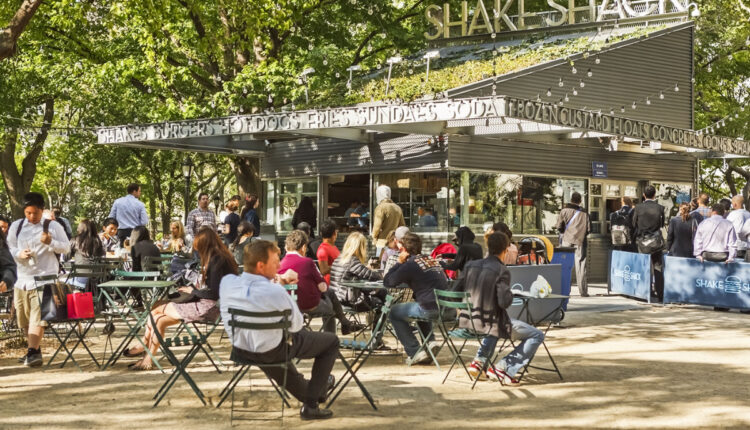 Restaurants have been hit hard during the pandemic, and many New York City restaurants in particular experienced a huge drop in business due to lockdown. However, one famous burger joint that’s adored in New York has planned out an exciting way to thrive: Keep growing outside New York.

Continue reading to learn about the big plans for Shake Shack—and, check out This Local Fast Food Chain Is Opening Up Inside Walmart.

Famed chef Danny Meyer started Shake Shack in 2001 as a relatively humble operation in Madison Square Park. The brand quickly built a following, with New Yorkers and visitors seeking out the open-air restaurant stand as a reliable spot for burgers and fries.

The Rise of Shake Shack

Within the following decade, Shake Shack had opened several locations around New York City as well as in Miami for its first venture outside of NYC.

Today, the Shake Shack website suggests it has over 300 locations in 16 U.S. states, as well as Mexico, Europe, the Middle East, and Asia.

But This Hit Took a Hit

Another bit of Shake Shack pandemic drama occurred when, as NBC News reported, the company accepted millions of dollars in government aid through the Paycheck Protection Program—a move that garnered public criticism for taking money away from small, independently owned businesses.

Subsequently, Shake Shack leaders returned the money, according to NPR.

RELATED: The Saddest Restaurant Closures in Your State

Restaurant Dive reported that this week on a quarterly sales call, Shake Shack’s executives announced plans for its “largest expansion to date,” aiming to open 45 to 50 new restaurants around the U.S. in 2022.

It’s said suburban locations will be the “prime focus” for half of these locations, naming Kansas City, Minneapolis, Orlando, and Detroit in specific as cities that will see more of the Shack.

RELATED: The Best French Fries in Every State

The report also mentions that Shake Shack will introduce new formats at some of these upcoming locations. Roughly 10 of the new spots will offer drive-thru service, while another 10 host a drive-up window or the classic Shake Shack walk-up format. Some of the new Shake Shack openings will also appear inside shopping centers.

The post This Struggling Burger Chain Just Announced a Bounce-Back Plan With 50 New Locations Nationwide appeared first on Eat This Not That.

This Supplement Can Raise Your Heart Attack Risk, Experts Say