This Is the Most Popular Beer in Your State, New Report Says 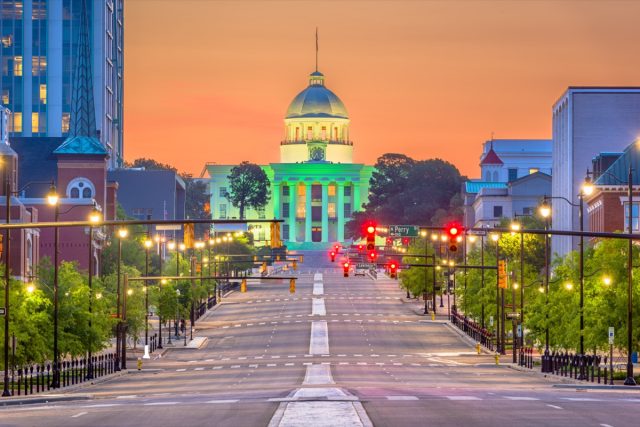 Whether you like to crack open a PBR on the weekends or regularly sample craft beers at your local breweries, beer is an undeniably beloved beverage. In fact, according to a recent report from the World Health Organization, U.S. residents drink more beer than any other type of alcoholic beverage, consuming an average of 28.2 gallons of suds each year.

However, not all beers are created equal when it comes to popularity. The recently published TOP Data Beer Report reveals the most popular beer in every state in the continental U.S., from imported ales to local brews. Read on to discover which beer was voted the most popular in your state. And for more of America’s favorites, This Is the Best Supermarket in America, New Survey Says.

The most popular beer in Alabama is none other than Budweiser, which first hit the market 145 years ago. The beer, originally produced in St. Louis, Missouri, was created in an attempt to mimic the Czech beers Anheuser-Busch co-founder Adolphus Busch was fond of.

For the latest food and drink news delivered to your inbox, sign up for our newsletter!

It’s not just the Most Interesting Man in the World who favors Dos Equis. The Mexican-born beer was also voted the most popular beer in Arizona and cracked the top five in Alabama, Tennessee, and Texas.

Like Alabama, Budweiser earned top marks in Arkansas. In fact, Bud is so popular in the Southern state that Bud Light earned the number two spot among Arkansas residents.

Budweiser and Bud Light may have earned the number one and two spots in California, but a local beer was among the state’s favorites. Sierra Nevada, a Chico-born beer named after the mountain range that runs parts of the western U.S., took the number five spot in the Golden State.

RELATED: The #1 Best Beer to Drink, According to Experts

While Connecticut is home to many beloved breweries, like 30 Mile Brewing Company and Stony Creek Brewery, it was none other than Bud Light that earned the state’s highest praise.

Delaware residents sure know how to support their local businesses! Milton, Delware-based Dogfish Head was voted the state’s most beloved beer.

Belgian-born Stella is Florida’s most beloved beer. However, the state’s residents have quite a fondness for the King of Beers, too, with Bud Light and Budweiser earning the second and third spots, respectively.

Georgians are solid supporters of their local brewers. According to TOP Data’s report, Athens, Georgia-based Terrapin is the Peach State’s favorite beer.

While Budweiser and Bud Light were ranked first and second among beer drinkers in Idaho, the state’s residents do have a soft spot for a local brew. Idaho-based Grand Teton earned fifth place among the state’s favorite beers.

Illinois residents are big fans of their hometown brew, Goose Island. The company, which was founded in Chicago, is named after a small artificial island between the city’s Cabrini-Green, Noble Square, and River West neighborhoods.

RELATED: This One Beer Is The Secret to Living 100 Years, Says a 106-Year-Old

Indiana’s favorite beer is none other than Miller Lite, with Bud Light and Budweiser earning the state’s number two and number three spots, respectively.

Want to make friends at a local watering hole in Kentucky? All it takes is ordering a round of Budweisers for the bar, according to TOP Data’s research.

Hometown pride elevated Covington, Louisiana-based Abita to the top of the heap in the Pelican State, followed by Bud Light, Heineken, Budweiser, and Stella.

While Budweiser may be the most popular beer among Mainers, a local favorite was hot on its heels. Allagash White, produced in Portland, Maine, earned second place.

Sorry, Sam Adams! The Bay State’s most popular beer is none other than Budweiser—and not a single local brew cracked the top five.

U.S.-made beers earned four out of the top five spots among Michiganders, with Budweiser coming in first place. However, in second was none other than Dutch import Heineken.

If you’ve never had a Lazy Magnolia beer, you must not be from Mississippi. The local beer earned the state’s top honors, followed by Budweiser.

Missouri residents sure do like their American beers. Budweiser earned the state’s top spot, followed by Bud Light and Coors Light.

RELATED: The Best Brews You Need To Try This Fall, Say Beer Experts

Local pride runs deep among beer lovers in the Cornhusker State. Nebraskans’ favorite beer is none other than Nebraska Black Betty, produced by the Nebraska Brewing Company.

While the Sierra Nevada may be the most famous mountain range running through Nevada, it seems like the state’s residents are eager to “tap the Rockies,” since Coors Light is the state’s most beloved brew.

While New Hampshire is home to beloved brewery Smuttynose, it was none other than Budweiser that earned top marks in the Granite State.

New Mexico’s favorite beer was none other than local brew La Cumbre, from the Albuquerque-based brewery of the same name.

New York is full of Budweiser fans, it would seem. Budweiser and Bud Light took the Empire State’s number one and number two spots, respectively.

While Bud Light may have earned top marks in North Carolina, a smaller brewery was hot on its heels. Colorado-born New Belgium earned the number two spot in the state.

RELATED: We Tasted 10 Popular Light Beers & This Is the Best

North Dakota’s most populous city and most popular beer share a name: Fargo!

Ohio was one of three states that called Heineken its favorite beer.

Oregon may be a haven for craft beer lovers, but none of the state’s local breweries cracked the top five. Instead, Budweiser, Heineken, Stella, Coors Light, and Bud Light were the state’s five most popular beers.

While Yuengling may be the most famous beer made in Pennsylvania, it didn’t even number among the top five most popular beers in the state. Instead, it was Bud Light that earned Pennsylvania’s top spot.

Which beer gets a perfect ten in Tennessee? None other than Budweiser, the most popular beer in the country, according to TOP Data’s ranking.

The Lone Star state sure loves its local beer. While Lone Star beer is owned by Pabst Blue Ribbon, its headquarters are in San Antonio.

While Budweiser is the most popular beer in Utah, a local favorite came close behind. Uinta Cutthroat, called a “Utah classic” by its manufacturer, earned the state’s number two spot.

Bud Light and Budweiser earned the number one and three spots on the list of Vermont’s most popular beers. However, a local favorite, Alchemist, nabbed the number two rank.

As is true in many other states, Budweiser is the most popular beer in West Virginia, with Bud Light, Coors Light, Heineken, and Pabst Blue Ribbon rounding out the top five.

Produced by New Glarus, Wisconsin-based New Glarus Brewing Company, Spotted Cow is the most popular beer in the Badger State.

Jackson, Wyoming-based Snake River is Wyoming’s most popular beer. However, the other beers that made the top five were pretty familiar fare: Bud Light, Budweiser, Guinness, and Miller Lite.

The post This Is the Most Popular Beer in Your State, New Report Says appeared first on Eat This Not That.

The Best Fried Chicken in Every State