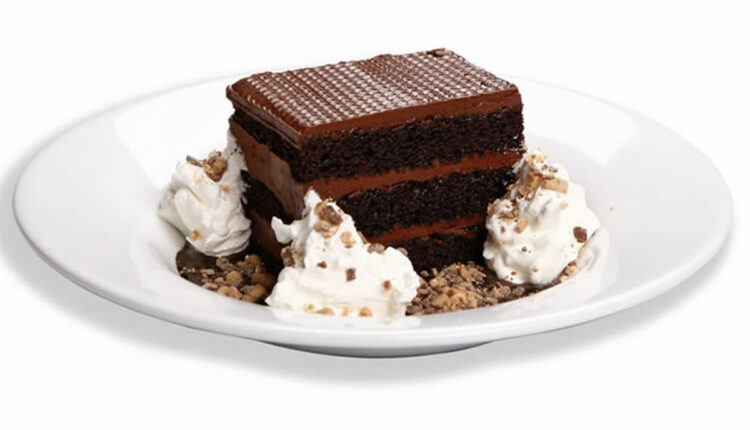 It’s OK if you need an occasional cheat meal every once and a while. Sometimes, you just can’t help it when your sweet tooth comes calling. If you decide to order dessert while you’re dining out, that’s totally fine—as long as you’re splitting it with at least one other person. Trust us, once you get a glimpse of some of your favorite restaurants’ biggest culprits, you won’t want to eat one of these by yourself.

That’s right—we rounded up the dessert options you shouldn’t look twice at, ranked from bad to the absolute worst. They’re packed with calories, sugar, fat, and sodium, most of which are actually dangerous for your health to be consuming regularly. Simply put, eating these desserts on top of your main course is just asking for trouble. Your waistline will thank you later! (And while you’re making healthy changes, be sure to check out the 100 Unhealthiest Foods On the Planet.)

The shocking thing about this chocolate cake is that it’s the lowest in sugar compared to the other chocolate slices on this list—and it’s coming in with 48 grams of the sweet stuff.

RELATED: Sign up for our newsletter to receive more healthy recipe ideas and food news.

A milkshake is technically a dessert, but who hasn’t been there when you’ve decided to sip on one of these while you eat your meal? Well, at IHOP, the Oreo Cookie shake is packing more than 700 calories and 63 grams of sugar, and it’s no secret plenty of their breakfast options are already loaded with sugar!

These bite-sized cinnamon biscuits seem harmless, but anything small like this is dangerous. You can easily eat all of these yourself, but the fact that it packs a ton of sodium and sugar is just a no-go.

Adding on a milkshake to the end of your meal from Chick-fil-A sounds nice in theory, but a strawberry milkshake has the same amount of calories as a Spicy Deluxe Sandwich. And this drink is packing 76 grams of sugar—yikes!

At Perkins, this option from the dessert menu is a fresh-baked chocolate walnut brownie that is smothered with vanilla ice cream, hot fudge, a whipped topping, and a cherry. It will cost you 84 grams of sugar and sorry, but that’s just not worth it!

If you haven’t already caught on to the trend, the overly decadent chocolate cakes seem to be the biggest offenders at most restaurants. At Buffalo Wild Wings, that is the case, too. The Chocolate Fudge Cake has more calories than you should consume in one meal and the 85 grams of sugar is not helping.

The McFlurry might be a classic at McDonald’s but the regular-size is packing 86 grams of sugar and has more calories than a Big Mac.

RELATED: The #1 Worst Drink You Should Never Order at McDonald’s

This dessert from California Pizza Kitchen is served up warm, along with whipped cream and vanilla Häagen-Dazs ice cream. By the looks of it, this seems like it’s a reasonable portion size, but don’t let the size fool you. It’s coming in at more than 1,000 calories and is packing more sugar than six Chocolate Frosted Donuts from Dunkin’.

Here, a rich fudge brownie is topped with chocolate mousse, fresh whipped cream, and chocolate sauce, creating a sugar and sodium-filled option you’re going to avoid ordering next time you have a meal from Carrabba’s. Sorry, but this is more of a nightmare than a dream!

Again, a chocolate cake covered in more chocolate that is served up alongside ice cream is proving to be a dangerous mix, no matter where you dine, even at Red Lobster.

Yes, milkshakes are rather problematic as well. At Burger King, the chocolate Oreo shake has more calories than BK’s Original Chicken Sandwich and serves up more than 100 grams of sugar. Keep in mind The American Heart Association recommends women have no more than 100 calories per day of added sugars, or about 6 teaspoons, and for men, it’s 150 calories per day, or about 9 teaspoons.

It’s been a little while since we’ve seen a dessert option clock in at under 1,000 calories, but this brownie from Bonefish Grill just makes it. Don’t let that fool you—while it’s more reasonable when it comes to the amount of sodium compared to the others on this list, there are 100 grams of sugar you’ll be consuming thanks to this dish.

RELATED: This Is the Most Popular Menu Item at Bonefish Grill

Having a warm chocolate chip cookie that is baked in a skillet served to you along with a scoop of vanilla ice cream really screams “ultimate comfort food.” But this small sweet treat from Chili’s is anything but sweet if we’re being honest here with those 104 grams of sugar it serves up.

The scary milkshakes strike again! This time, it’s a strawberry and Oreo combination that features malt powder from Jonny Rockets that is clocking in at more than 1,000 calories and over 100 grams of sugar.

Don’t think Ruby Tuesday‘s Chocolate Chip Cookie Skillet is the exception to the “beware of the cookie skillet” rule. This dessert is small enough for one person to indulge, which makes it more dangerous, and the fact that it’s higher in calories than some of the actual meal options on the menu is reason enough to leave this dish alone.

This Oreo Peanut Butter Shake milkshake from Sonic is more than 1,700 calories—just let that sink in. Then you see it has more than 1,000 milligrams of sodium and 111 grams of sugar, and you have every right to be truly terrified.

RELATED: The 10 Wildest Restaurant Uniforms of All Time

Another chocolate cake that just takes things way too far! This mousse cake that is covered in chocolate chips and has a chocolate drizzle is packed with fat and sugar. Not surprising at this point but more proof that these restaurant chocolate bombs are not just not good for you in the slightest.

Expected to see a cheesecake from The Cheesecake Factory take the top prize of the worst dessert? Well, the carrot cake just had to claim that honor with its astonishing amount of calories, fat, sodium, and sugar.

RELATED: The #1 Healthiest Dessert at the Cheesecake Factory, Dietitian Says

The Chocolate Zuccotto Cake from Maggiano’s is a favorite and it’s easy to see why, as we know mouse and chocolate cake pair perfectly together. But the amount of sugar that this combination serves up—120 grams to be exact—is a literal disaster.

This milkshake brings on a wave of nostalgia, as anything cake batter and Funfetti seems to always do, but when you’re at Denny’s refrain from ordering it. With 122 grams of sugar, it’s just sweetness overload, and not in a good way.

Outback Steakhouse Chocolate Thunder From Down Under

The Chocolate Thunder From Down Under might have a fun name to it, but there is nothing fun about this dessert from Outback Steakhouse!

At Red Robin, these dough rings are easy to split after dinner with your friends or family, but seeing how much sodium and sugar they pack is reason enough to not order this for the table.

Perhaps this brownie and ice cream combo from Applebee’s would be much better if it served up half of what you get now—just one brownie and scoop of ice cream seems much more reasonable. Think about sharing this one with at least one other person, as you don’t need to consume all this fat and sugar yourself!

Dining at Bahama Breeze gives you the feeling that you’re on a Caribbean vacation, so going for the key lime pie just sounds right. But the amount of sugar in one slice, 132 grams, is nothing to celebrate.

This is proof that just because something is gluten-free, that doesn’t automatically make it good for you. The Pizookie is BJ’s Restaurant & Brewhouse signature dessert, but this skillet cookie sundae is one to skip.

RELATED: We Tasted 6 Chocolate Chip Cookies, and This Is the Best One

In this Applebee’s sweet treat, you’re in for some cinnamon apples that are surrounding a butter pecan blondie that is topped with vanilla ice cream. Oh, and the ice cream is sizzled and drizzled with caramel sauce and candied pecans. This makes for a dessert that is coming in at more than 1,200 calories and 138 grams of sugar.

TGI Friday’s Red Velvet Cake honestly looks so inviting but don’t fall for it. There is nothing redeeming about this cake. Just one piece that is served with ice cream is more than 1,600 calories and has nearly 150 grams of sugar. We wouldn’t even consider splitting this with someone else!

Instead, why not make your own cake at home? Allow The Most Basic Cake Recipe Ever to help you out.

The Blizzard is Dairy Queen‘s staple, but the Brownie Dough variety is simply dangerous.

RELATED: Every Dairy Queen Blizzard on the Menu—Ranked!

O’Charley’s brownie is described as decadent and it’s easy to see why. It’s filled with toffee morsels, drizzled with chocolate and caramel sauces, and topped with vanilla ice cream, creating a dessert that has more than 150 grams of sugar.

RELATED: The Best and Worst Frozen Desserts in America in 2021—Ranked!

A trip to Friendly’s typically means you’re going there specifically to get some ice cream, but the large Hunka Chunka PB Fudge Lava Cake takes things to the next level. Here, a peanut butter filled warm chocolate cake is served atop three scoops of Hunka Chunka PB Fudge ice cream and is topped with peanut butter, chocolate chips, and a Reese’s peanut butter cup. If you really want to take a bite, we suggest splitting this with a few people, as it contains more calories than most people should have in one day. And it’s packing nearly 160 grams of sugar!

RELATED: The Worst Restaurant Salads in America in 2021

There is nothing “awesome” about this cake, clocking in at more than 1,700 calories and 168 grams of sugar. That’s as much sugar as you’ll get in 35 Oreo cookies!

RELATED: We Tasted 5 Frozen Cheese Pizzas—and This Is the Best

One slice of this bad boy from P.F. Chang’s, which is made up of six layers of frosted chocolate cake with semi-sweet chocolate chips, and you’re in for 190 grams of sugar. That’s literally more sugar than you’ll get in an entire pint of Breyers Chocolate Ice Cream…

Here, two scoops of ice cream cover slices of apples and pecan streusel that are oven-baked in a special crust. Sounds delicious, but it packs 190 grams of sugar. Short answer: just say no. And for other sugar-packed dishes you should stay away from, here are 35 Sugariest Restaurant Meals on the Planet.

Why have one Pizookie from BJ’s Brewhouse when you can order three? This dessert trio is a way to try multiple flavors of BJ’s Brewhouse’s famous sweet treat and the sizes are even considered “mini.” But if you happen to choose the Salted Caramel, Monkey Bread, and Cookies ‘n’ Cream flavors, this combination adds up to 204 grams of sugar—the same amount found in four cans of Crush Pineapple soda.

Let us start by saying, Longhorn Steakhouse’s Chocolate Stampede should be eaten by at least two people because it’s that big. There are six types of chocolate here served with vanilla bean ice cream that creates a dish that is more than 2,000 calories and has 3.5 grams of trans fat. Even if you split this dish evenly with someone else, that doesn’t make it any better. And 191 grams of sugar? That’s just evil!

Read more about your favorite chains:

13 Secrets About The Cheesecake Factory Every Fan Should Know

The post The Unhealthiest Restaurant Desserts appeared first on Eat This Not That.