The #1 Cause That Makes You Look Older, According to Science 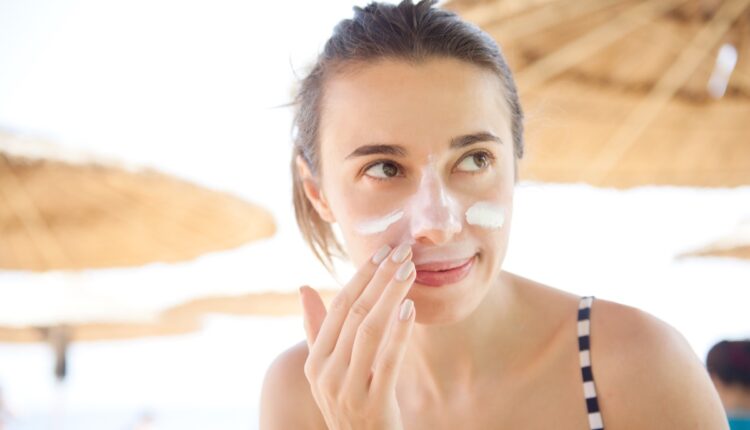 Most of us indulge in a bad habit or two on a regular basis that seems harmless enough, but it isn’t. Many of the bad behaviors we can’t seem to shake are not only unhealthy, but can speed up the aging process. While we can’t stop time, we can slow it down by simple lifestyle changes. Eat This, Not That! Health talked to medical experts who revealed 9 bad habits that will make you look prematurely older. Read below for tips on what habits to avoid to help stay looking young—and to ensure your health and the health of others, don’t miss these Sure Signs You’ve Already Had COVID.

Spending too much time in the sun is not only dangerous and can cause skin cancer, but it will increase aging, says “Dr. Terrell Smith MD, MPH, Founding Physician of Spora Health, a telehealth platform offering primary care for people of color.

“The sun’s ultraviolet rays increase the aging rate by 80% and studies have found that sun damage can cause the skin to look older, more wrinkled and dry. Be sure to incorporate sunscreen in your daily skincare routine to reduce the impact of premature aging. Based on the fairness (lightness) of your skin, you could consider using a higher SPF until you have achieved an appropriate/healthy tanning of the skin.”

Wes Ulm, MD, Ph.D. Physician-scientist and professional musician (J. Wes Ulm and Kant’s Konundrum) agrees and adds, “Swimming pools and beaches throughout the 50 states teem with Americans aspiring for that perfect golden-bronze tan in the spring and summer, but unfortunately, ultraviolet rays (both UVA and UVB) are associated with unhealthy aging, even on daily walks far away from crashing ocean waves. It’s easy to forget that the sun is a gigantic nuclear reactor in the sky, and while its radiating waves and heat are essential for the earth, its ultraviolet radiation can cause DNA damage in human cells through a variety of mechanisms with names like cross-linking and transversion. There are three different types of UV rays that shine into the earth’s atmosphere, with UVA and UVB rays making it through the ozone layer. Both can damage the skin in different ways, and without protective clothing or high-SPF sunscreen, the DNA damage to skin cells will accumulate, giving rise to unhealthy aging. Light-skinned individuals are most at risk — one of the reasons that Australia and New Zealand, with comparatively less ozone protection, have such staggering skin cancer rates for their populations descended from the British Isles. However, all skin tones are vulnerable to the associated DNA damage, and skin lesions represent the most common type of cancer in the US.”

Drinking water is essential for good health, but also for looking youthful according to Dr. Smith. “If you are waiting until your lips are chapped, and your mouth is dry before drinking a glass of water, it’s already too late. Proper hydration should be a regular part of your day — all day. Dehydrated skin can appear dry, lifeless, and gray. To keep your youthful glow, make drinking water – not sugary sodas or sports drinks – a priority. Try to have about 10 cups of water/drinks per day to be on the safe side. More water if you are active, but you won’t go wrong with around 10!”

Spending Too Much Time On Your Phone

Most of us are guilty of spending too much time on our phones and Dr. Smith explains why that’s a bad habit healthwise.

“These days, most of us are behind a screen for work or play with 60% of us spending more than 6 hours a day on our digital devices. This makes it really hard to escape the blue lights, which have been shown to change your skin cells and cause premature aging. High blue light exposure (at least 8 hours a day) can equate to the same amount of damage that 20 minutes of midday sun wreaking havoc on the body and making aging much faster. Importantly, avoid blue light before bedtime, as you can overstimulate your brain. Try to minimize screen time 1 hour before bed.”

RELATED: The #1 Cause of Obesity, According to Science

Staying social is key to living longer, says Dr. Smith. “Stop canceling plans. Spending time with friends and family can help you live longer. Research has shown that those who have strong social ties have a 50% higher chance of living longer than those who have poor or insufficient social relationships. Even if there are work interactions, take that extra time to see how your coworkers are doing. It helps build friendships, but also benefits your long-term health!”

RELATED: Signs You’re Getting One of the “Most Deadly” Cancers

Acting Older Than Your Age

Dr. Smith explains, “It is important to maintain a positive outlook in life as it can impact how you age. When we feel younger, we are more hopeful, productive and optimistic. Research has shown that those who feel or act older than their actual age are more likely to be hospitalized than those who act younger than their age. I am a huge supporter of therapy, I see a therapist myself and do not understand why there is a negative stigma around it. Seeing a therapist gives you a judgement-free zone to vent, talk about negatives in life, but also talk about the positives. So many benefits!”

RELATED: Health Habits You Should Never Do After Age 60, According to Doctors

Maintaining a poor diet isn’t good for several reasons and doesn’t help maintain a younger look Dr. Ulm explains. “It’s little secret that obesity is a major health crisis in the USA, with the United States as of 2021 statistics having close to the highest per capita levels of obese adults (and, distressingly, children) in the world. Obesity is associated with an array of chronic medical issues, among them an elevated risk of CAD (coronary artery disease), metabolic syndrome and diabetes, sleep apnea, gallbladder conditions, and higher rates of severe COVID-19 disease courses if infected. More generally, though, not only obesity itself, but also the very act of overeating seems to be correlated with elevated damage to cells and tissues. This dreaded phenomenon is further magnified by American diets rich in processed foods, refined carbs, saturated fats, and other toxic substances consumed in high amounts as part of the typical busy American lifestyle — one of the most serious deleterious impacts of the workaholic culture so prevalent in much of the country. The physiological mechanism for this remains unclear, and if anything it’s best glimpsed through studies of the opposite phenomenon, through which e.g. chronically underfed mice—- so long as core nutrition is maintained — are able, to varying degrees, to resist and even reverse the processes of aging (a potential benefit of intermittent fasting, though it generally must be pursued in aggressive fashion to see such effects). At any rate, research has consistently shown that poor portion control and chronically excessive consumption, coupled with the growth of adipose tissue (via proliferation of fat cells), somehow taxes bodily processes in a way to aggravate the effects of aging on skin and internal organs.”

Dr. Ulm says, “And now we dive a bit deeper into the “perils of the typical American lifestyle” section, as this is often framed in media reports which — quite accurately — note how physical inactivity is a significant contributor to terrible aging. The workaholic culture for which the US is notorious unfortunately has a markedly detrimental effect on long-term health, partly through magnifying the obesity crisis above (and exacerbating other issues discussed below), but perhaps most directly in the difficulty most Americans have in maintaining a regular exercise regimen. A raft of studies have conclusively shown that poor physical activity among Americans not only amplifies the negative sequelae of other health issues (such as elevated cholesterol and high blood pressure), but is also a serious independent contributor to unhealthy aging in its own right. Why? We’re not entirely sure, but recent research strongly suggests that chronic inflammation in cells, tissues, and blood vessels may be the primary culprit. Regular and vigorous forms of exercise — both aerobics and resistance training — help to fend this process off, while physical inactivity predisposes individuals to problematic aging and a slew of chronic health problems.”

While it’s known that stress increases health issues, but it also “unhealthy aging,” according to Dr. Ulm. “And now we arrive at the third member of the three-legged stool of chronic medical issues prevalent as part of the typical modern American lifestyle, which in turn engenders unhealthful aging — sustained high stress, work-related and otherwise. Once again, this isn’t just a matter of the indirect effects, such as the contribution of stress to poor diets and overeating or to substance abuse (particularly the deadly opioid epidemic and meth crisis). Rather, there are documented direct harms of this high stress on the physiological integrity, and the capacity for repair and replenishment, of human cells and tissues. As with poor exercise habits, studies indicate that high stress ignites the fires of chronic inflammation. There’s even evidence of direct DNA damage, with Americans in habitually stressful professions or situations found, in many cases, to have a higher rate of DNA damage and shorter telomeres — the protective caps on the tips of human chromosomes, which help them to maintain their proper length. All of these effects together amount to deeply unhealthy aging.”

RELATED: Sure Signs You’ve Had a “Small Heart Attack”

By now everyone should know smoking is one of the worst things we can do to our bodies and Dr. Ulm says, “This one probably needs little introduction, but smoking (among other forms of chemical dependency) is tightly associated with unhealthful aging. As with the factors above, some of the damage is indirect, secondary to other unhealthy habits associated with (and provoked by) smoking and its noxious effects on the lungs and heart. However, the tar in smoking consists of a variety of carcinogenic compounds associated with oxidative and other forms of damage that can directly mutate DNA. This in turn leads to mistakes in DNA replication which, cumulatively, can damage a variety of tissues, even outside the heart and lungs themselves.” So don’t smoke, and to protect your life and the lives of others, don’t visit any of these 35 Places You’re Most Likely to Catch COVID.

The post The #1 Cause That Makes You Look Older, According to Science appeared first on Eat This Not That.