The #1 Cause of Dementia, According to Science 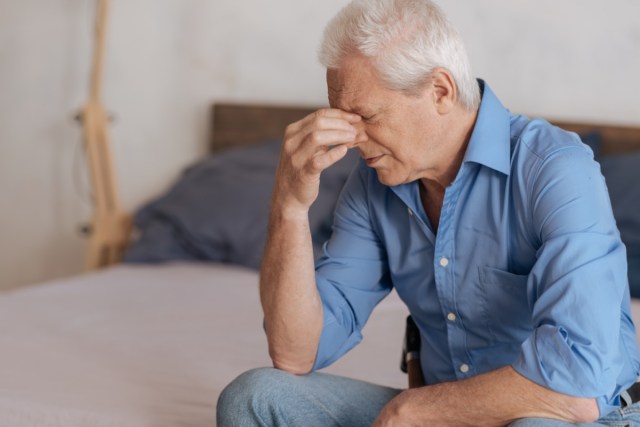 According to the Centers for Disease Control and Prevention, there are an estimated 5 million adults living with dementia—and that number grows every year. In fact, by the year 2060 they predict that number to multiply to nearly 14 million. While often referred to as a disease or illness, dementia is actually a general term to describe “impaired ability to remember, think, or make decisions that interfere with doing everyday activities.” While occasionally forgetting a name or misplacing car keys is a normal part of aging, dementia isn’t. Here is everything you need to know about it—including the number one cause of the memory-impairing condition. Read on—and to ensure your health and the health of others, don’t miss these Sure Signs You Have “Long” COVID and May Not Even Know It.

According to the National Institutes of Health’s National Institute on Aging, dementia is defined by the loss of cognitive functioning and can range from mild to severe. This includes thinking, remembering, and reasoning—in addition to behavioral abilities “to such an extent that it interferes with a person’s daily life and activities,” they explain. “These functions include memory, language skills, visual perception, problem solving, self-management, and the ability to focus and pay attention.” Furthermore, some people with the condition cannot control their emotions and their overall personality may change. In worst case scenarios, the person cannot live on their own and has to depend on others to help with basic activities of living.

While it is normal to lose neurons during the aging process, in the case of dementia, more of these once-healthy nerve cells stop working, lose connections with other brain cells, and die.

Another thing about dementia? It is progressive, explains Carlyn Fredericks, MD, memory loss expert in Yale Medicine’s Department of Neurology. “Unfortunately, dementia symptoms get worse over time despite our best efforts,” she tells Eat This, Not That!

There are several different types of neurodegeneration, as outlined by the CDC.

Alzheimer’s Disease: Alzheimer’s is the most common form of dementia, responsible for 60 to 80 percent of cases. It is caused by specific changes in the brain. It usually manifests itself as memory issues—like trouble recalling recent events, including conversations that just occurred. Then, later on after the disease progresses, someone might have trouble remembering more distant memories. Other issues—difficulty walking or talking or personality changes—are also common later on. The biggest risk factor? Family history. “Having a first-degree relative with Alzheimer’s disease increases the risk of developing it by 10 to 30 percent,” the CDC explains.

Vascular Dementia: Strokes or other blood flow issues can also lead to dementia in the form of what is called vascular dementia, accounting for about 10 percent of cases. Other risk factors include diabetes, high blood pressure and high cholesterol. “Symptoms vary depending on the area and size of the brain impacted. The disease progresses in a step-wise fashion, meaning symptoms will suddenly get worse as the individual gets more strokes or mini-strokes,” explains the CDC.

Lewy Body Dementia: This form of dementia manifests itself in memory loss as well as movement or balance problems like stiffness or trembling. “Many people also experience changes in alertness including daytime sleepiness, confusion or staring spells. They may also have trouble sleeping at night or may experience visual hallucinations (seeing people, objects or shapes that are not actually there),” the CDC explains.

Fronto-Temporal Dementia: Changes in personality and behavior define fronto-temporal dementia, named after the part of the brain affected. “People with this condition may embarrass themselves or behave inappropriately. For instance, a previously cautious person may make offensive comments and neglect responsibilities at home or work. There may also be problems with language skills like speaking or understanding,” the CDC explained.

How Do I Know I Have It?

There are many symptoms of dementia, according to the CDC, with many of them outlined above. The most common are memory loss, issues with paying attention, communication problems, reasoning, judgment, and problem solving issues and visual perception beyond typical age-related changes in vision.

Specific signs that can point to dementia include getting lost in a familiar neighborhood, using unusual words to refer to familiar objects, forgetting the name of a close family member or friend, forgetting old memories, or not being able to complete tasks independently

Here Are the Top Contributing Factors

According to the CDC, there are many risk factors of dementia.

Age: The older you get, the more likely you are to develop dementia.

Family history: Dementia runs in the family, according to the CDC. “Those who have parents or siblings with dementia are more likely to develop dementia themselves,” they explain.

Heart Health: Those with poor cardiovascular health are more likely to develop dementia. High blood pressure, high cholesterol, and smoking can all play a role.

Traumatic Brain Injury: “Head injuries can increase the risk of dementia, especially if they are severe or occur repeatedly,” the CDC says.

What Is the Number One Cause?

According to the CDC the number one contributing factor for dementia is increasing age, with most cases impacting those 65 and over. The second? Family history.

How to Prevent It

While in most cases, dementia is not preventable, Dr. Fredericks explains that there are a lot of contributing factors that you may be able to do something about, “including improving your level of exercise (especially cardiovascular fitness), decreasing heavy alcohol use, improving your sleep (and treating sleep apnea, if present), eating well (a Mediterranean diet seems to be especially helpful), and making sure you are working with your doctors to keep a close eye on chronic illnesses such as high blood pressure, high cholesterol, and diabetes,” she explains.

The Alzheimer’s Association has detailed the best practices to prevent dementia in 10 Ways to Love Your Brain. “Growing evidence indicates that people can reduce their risk of cognitive decline by adopting key lifestyle habits,” they explain.

How Is Dementia Treated?

Unfortunately, there is no cure for most types of dementia, including Alzheimer’s, per the CDC. However, there are medications that can help protect the brain or manage symptoms, including anxiety or behavior changes.

What to Do If You Notice Symptoms

If you believe you or a loved one is demonstrating symptoms of dementia, the NIH recommends contracting your medical provider for an assessment. “Don’t be afraid to get them checked out early!” encourages Dr. Fredericks. “Having an experienced physician evaluate you and determine whether there is a need for further testing—whether blood tests, brain imaging, or pen-&-paper neuropsychological testing—can help you identify the cause of your symptoms as early as possible (and reassure you if what you are experiencing is more likely the result of normal aging).” And to get through this pandemic at your healthiest, don’t miss these 35 Places You’re Most Likely to Catch COVID.

The post The #1 Cause of Dementia, According to Science appeared first on Eat This Not That.

This Is the #1 Worst Nighttime Snack for Your Waistline, Says an Expert