The #1 Cause of Alzheimer’s, According to Science 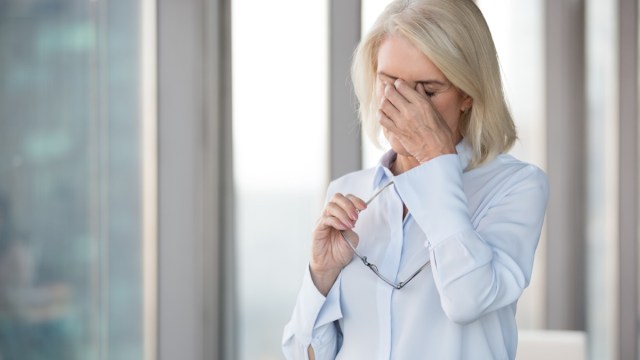 Alzheimer’s disease is the most common form of dementia, a neurologic disorder that can lead to memory loss and impaired thinking skills and is responsible for more deaths than prostate and breast cancer combined. Over 6 million Americans aged 65 and older are living with Alzheimer’s, a number projected to reach 14 million people by the year 2060 — which means you probably know someone whose life is, or has been, affected by the disease. Red on to discover the #1 cause of Alzheimer’s, according to science. And to ensure your health and the health of others, don’t miss these Sure Signs You Have “Long” COVID and May Not Even Know It.

So What is Alzheimer’s?

So what exactly is Alzheimer’s? The condition is thought to be caused by a buildup of amyloid protein plaque around the brain cells, something that can be going on for several years before any symptoms of the disease make themselves apparent. As for the symptoms themselves — here are the 10 early signs of Alzheimer’s, according to the Alzheimer’s Association:

When it comes to the causes of Alzheimer’s, there are a few consistent factors that are strongly linked to the disease. Read on to find out more about the number one cause of Alzheimer’s is.

By far the most prevalent and significant risk of Alzheimer’s disease is increasing age, with the chance of getting the disease doubling every five years once you are over the age of 65. It is important to note that while the risk of Alzheimer’s increases with age, age itself is not a direct cause.

“It’s important for those over 65 to be aware of the early signs and symptoms of Alzheimer’s and consider a cognitive assessment every 5 years to be proactive,” says Melanie Keller ND, naturopathic doctor.

It’s not just older people at risk from Alzheimer’s — statistics show that 5% to 6% of people diagnosed developed “early onset” Alzheimer’s disease, which means showing signs before the age of 65.

Unfortunately there is a hereditary component to Alzheimer’s disease — 40-65% of people who are diagnosed are known to also carry the APOE-e4 gene, the gene associated with the strongest risk of Alzheimer’s.

“When a person has an increased risk for Alzheimer’s due to their family history, I recommend specific functional testing that measures Alzheimer’s-associated immune reactivity to identify the early stage of neurodegenerative processes and/or to monitor the effectiveness of lifestyle modifications for Alzheimer’s disease,” says Keller. “In my practice, I order a test that includes a person’s genetic (APO-E) status since one of the three forms (APOE-e4) is the first risk gene identified that remains the gene with the strongest impact on Alzheimer’s risk.”

Other Risk Factors for Alzheimer’s Disease

While research is still ongoing about the causes and treatment of Alzheimer’s, there are other less common risk factors to be considered, according to the NHS: People with Down’s syndrome, cardiovascular disease, head injuries, hearing loss, chronic loneliness and untreated depression, and those who live a sedentary lifestyle have an increased risk of developing Alzheimer’s. While there is a strong link between these conditions and the disease, it is more of a correlation than a proven cause.

“A number of conditions, including treatable conditions, can result in memory loss or other dementia symptoms. If you are concerned about your memory or other thinking skills, talk to your doctor for a thorough assessment and diagnosis,” reports the Mayo Clinic. “If you are concerned about thinking skills you observe in a family member or friend, talk about your concerns and ask about going together to a doctor’s appointment.” And to get through this pandemic at your healthiest, don’t miss these 35 Places You’re Most Likely to Catch COVID.

The post The #1 Cause of Alzheimer’s, According to Science appeared first on Eat This Not That.

Major Effects Drinking Wine Has on Your Health, Says Science