The #1 Cause of Alzheimer’s, According to Experts 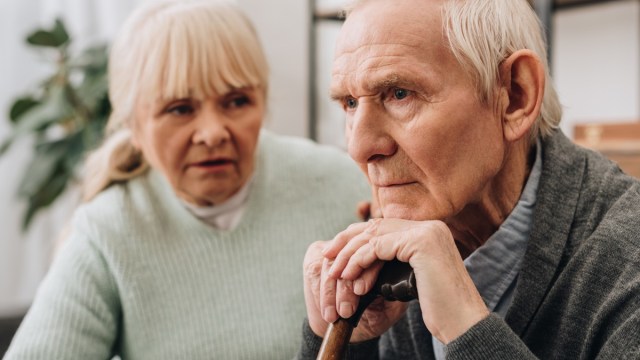 Alzheimer’s disease is a well-known, and much-feared, disorder of the later years: More than five million Americans are currently affected. But it’s still poorly understood. Scientists are still trying to figure out why some people develop the progressive disease and others don’t, and how it might be effectively slowed or reversed. But recent research has shed light on the potential causes of Alzheimer’s, and what might be done to prevent it. Read on to find out the #1 cause of Alzheimer’s disease—and to ensure your health and the health of others, don’t miss these Sure Signs You Have “Long” COVID and May Not Even Know It.

Alzheimer’s disease is the most common form of dementia, an umbrella term for several disorders that can cause changes to memory, thinking, and personality that interfere with a person’s ability to function. According to data from the Centers for Disease Control & Prevention, about 5.8 million people have Alzheimer’s in the U.S. today.

What Happens If You Have It?

“Alzheimer’s is a progressive disease, where dementia symptoms gradually worsen over a number of years,” says the Alzheimer’s Association. “In its early stages, memory loss is mild, but with late-stage Alzheimer’s, individuals lose the ability to carry on a conversation and respond to their environment.”

Alzheimer’s is the sixth-leading cause of death in the U.S. A person with Alzheimer’s lives, on average, four to eight years after diagnosis but can live as long as 20 years.

Although Alzheimer’s currently has no cure, there is one treatment, a drug called aducanumab (brand name Aduhelm) that may slow cognitive decline, the Alzheimer’s Association says.

How Do I Know If I Have It?

Memory loss that disrupts daily life
Challenges in planning or solving problems
Difficulty completing familiar tasks at home, at work, or at leisure
Confusion with time or place
Trouble understanding visual images and spatial relations, which may cause problems with balance or coordination
New problems with words in speaking or writing
Misplacing things and losing the ability to retrace steps
Decreased or poor judgment
Withdrawal from social activities or work
Personality or mood changes

“Scientists do not yet fully understand what causes Alzheimer’s disease,” the CDC says. “There likely is not a single cause but rather several factors that can affect each person differently.” These include:

“Experts agree that in the vast majority of cases, Alzheimer’s, like other common chronic conditions, probably develops as a result of complex interactions among multiple factors, including age, genetics, environment, lifestyle and coexisting medical conditions,” the Alzheimer’s Association says.

Since the vast majority of Alzheimer’s cases affect people over age 65, it seems the most common cause of Alzheimer’s disease is simply aging. “The strongest known risk factor for dementia is increasing age, with most cases affecting those of 65 years and older,” the CDC says.

The CDC says another important risk factor for Alzheimer’s is family history: Having a first-degree relative with Alzheimer’s increases your risk of developing the disease by 10 to 30 percent.

RELATED: Sure Signs You May Have Dementia, According to the CDC

How to Prevent It

Eating a heart-healthy diet, such as the Mediterranean or DASH diets, which include very little red meat and processed food, and are high in fruits, vegetables,
Getting regular exercise.
Maintaining good heart health. “Several conditions known to increase the risk of cardiovascular disease — such as high blood pressure, diabetes and high cholesterol — also increase the risk of developing Alzheimer’s,” the Alzheimer’s Association says. “Some autopsy studies show that as many as 80% of individuals with Alzheimer’s disease also have cardiovascular disease.”
Maintaining social contacts. This may help prevent Alzheimer’s by keeping the brain active. Research has found that people who are lonely or socially isolated have an increased risk of developing dementia, including Alzheimer’s.
Avoiding head injury. And to get through life at your healthiest, don’t miss The #1 Cause of Diabetes, According to Doctors.

The post The #1 Cause of Alzheimer’s, According to Experts appeared first on Eat This Not That.

Sure Signs You May Be Getting Diabetes, Says CDC

Where to Buy KuCoin: KCS doubles in value in the space of a week