Sure Signs You May Have Dementia, According to Mayo Clinic 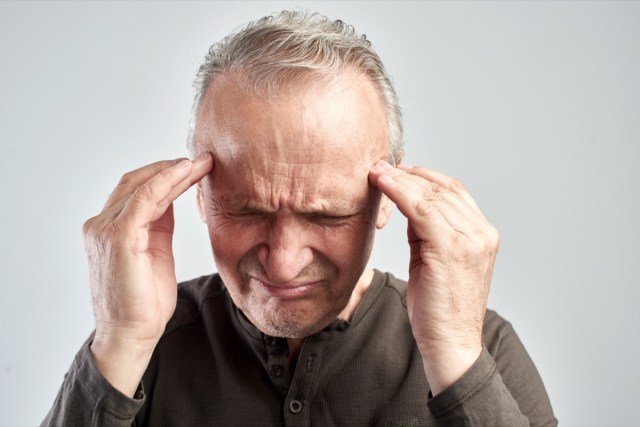 The warning signs you’re getting dementia can sneak up on you. “The word ‘dementia’ is an umbrella term used to describe a set of symptoms, including impairment in memory, reasoning, judgment, language and other thinking skills,” says the Mayo Clinic. “Dementia usually begins gradually, worsens over time and impairs a person’s abilities in work, social interactions and relationships” and “symptoms vary depending on the cause, but common signs and symptoms include” the following, says the Mayo Clinic. Read on—and to ensure your health and the health of others, don’t miss these Sure Signs You Have “Long” COVID and May Not Even Know It..

You May Have Memory Loss

“…which is usually noticed by a spouse or someone else,” says the Mayo Clinic. “Often, memory loss that disrupts your life is one of the first or more-recognizable signs of dementia. Other early signs might include:

Asking the same questions repeatedly
Forgetting common words when speaking
Mixing words up — saying ‘bed’ instead of ‘table,’ for example
Taking longer to complete familiar tasks, such as following a recipe
Misplacing items in inappropriate places, such as putting a wallet in a kitchen drawer
Getting lost while walking or driving in a familiar area
Having changes in mood or behavior for no apparent reason”

You May Have Difficulty Communicating or Finding Words

“People with the most common types of dementia, such as Alzheimer’s disease and vascular dementia, usually have a mild form of aphasia,” says the NHS. “This often involves problems finding words and can affect names, even of people they know well.”

You May Have Difficulty with Visual and Spatial Abilities

“…such as getting lost while driving,” says the Mayo Clinic. “Dementia-related visual-spatial problems include symptoms such as being unable to perceive the depth and space between objects,” says one home care company. “Seniors may also have difficulty understanding what they see, and some may experience hallucinations related to issues with their visual and spatial abilities.”

You May Have Difficulty Reasoning or Problem-Solving

“With any type of dementia, there will likely be noticeable decline in communication, learning, remembering, and problem solving,” says Help Guide. “These changes may occur quickly or very slowly over time. The progression and outcome vary, but are largely determined by the type of dementia and which area of the brain is affected.”

You May Have Difficulty Handling Complex Tasks

“Having dementia can make many everyday tasks increasingly problematic. People do lots of things automatically without thinking about it,” says Alzheimer’s Europe. “With dementia, simple tasks like getting dressed, having a bath or making a cup of coffee gradually become problematic – it is no longer obvious what to put on first; it is difficult to switch from the shower unit to the bath tap; the coffee machine is complicated to work out, etc. As these tasks seem so easy and obvious, it can be frustrating and embarrassing to mention it to other people. Consequently, many people with dementia struggle on, trying to hide their problems.”

You May Have Difficulty with Coordination and Motor Functions

You May Have Confusion and Disorientation

“In the earlier stages, memory loss and confusion may be mild. The person with dementia may be aware of — and frustrated by — the changes taking place, such as difficulty recalling recent events, making decisions or processing what was said by others,” says the Alzheimer’s Association. “In the later stages, memory loss becomes far more severe.”

You May Have Personality Changes

“People with dementia often act in ways that are very different from their ‘old self,’ and these changes can be hard for family and friends to deal with. Behavior changes for many reasons,” says the Weill Center for Neurosciences. “In dementia, it is usually because the person is losing neurons (cells) in parts of the brain. The behavior changes you see often depend on which part of the brain is losing cells.”

RELATED: The #1 Cause of Diabetes, According to Science

You May Have Depression

“Identifying depression in someone with Alzheimer’s can be difficult, since dementia can cause some of the same symptoms,” says the Alzheimer’s Association. “Examples of symptoms common to both depression and dementia include:

You May Have Anxiety

“Anxiety and agitation may be caused by a number of different medical conditions, medication interactions or by any circumstances that worsen the person’s ability to think,” says the Alzheimer’s Association. “Ultimately, the person with dementia is biologically experiencing a profound loss of their ability to negotiate new information and stimulus. It is a direct result of the disease. Situations that may lead to agitation include:

Moving to a new residence or nursing home
Changes in environment, such as travel, hospitalization or the presence of houseguests
Changes in caregiver arrangements
Misperceived threats
Fear and fatigue resulting from trying to make sense out of a confusing world”

You May Exhibit Inappropriate Behavior

“The diseases that cause dementia can damage parts of the brain that usually stop us behaving in inappropriate ways,” says the Alzheimer’s Society. “Remarks or actions of a [certain] nature can cause problems, particularly if directed at a friend or family member. However, it is important to realise that they are usually a symptom of the person’s dementia. Care home staff should know this and be trained in how to respond.”

You May Have Paranoia

“A person with Alzheimer’s may become suspicious of those around them, even accusing others of theft, infidelity or other improper behavior,” says the Alzheimer’s Association. “While accusations can be hurtful, remember that the disease is causing these behaviors and try not to take offense.”

You May Experience Agitation

Says the Mayo Clinic: “The following techniques may help reduce agitation and promote relaxation in people with dementia.

You May Have Hallucinations

“When a person with Alzheimer’s or other dementia hallucinates, he or she may see, hear, smell, taste or feel something that isn’t there,” says the Alzheimer’s Association. “Some hallucinations may be frightening, while others may involve ordinary visions of people, situations or objects from the past.” And to get through this pandemic at your healthiest, don’t miss these 35 Places You’re Most Likely to Catch COVID.

The post Sure Signs You May Have Dementia, According to Mayo Clinic appeared first on Eat This Not That.

This Is the Exact Amount of Alcohol That Derails Weight Loss, New Study Says