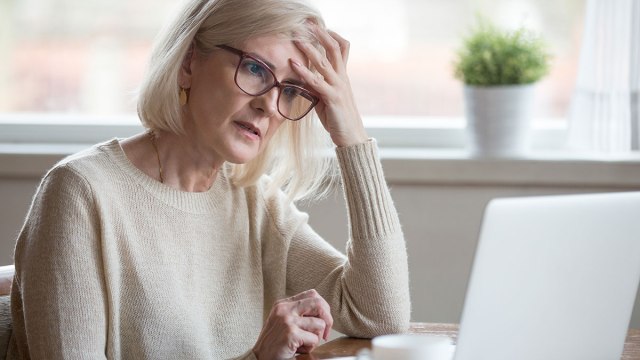 About two-thirds of dementia patients are women, and after age 60, a woman has a 1 in 5 chance of developing the condition, says the Women’s Alzheimer’s Movement. Complicating these statistics: Women tend to focus on caring for their partners, children, grandchildren, and other family—often at the expense of their own health. Dementia is a progressive disease, and early diagnosis is key so it can be treated or slowed if possible. That’s why it’s important that women, and those who love them, are able to recognize the most commonly ignored or overlooked signs of dementia. Read on to find out what they are—and to ensure your health and the health of others, don’t miss these Sure Signs You Have “Long” COVID and May Not Even Know It.

Problems with memory are one of the most common symptoms of dementia. They can also be difficult to spot. A certain level of forgetfulness is normal as we grow older—our brains can’t retain everything—but when memory issues begin to affect your day-to-day life, it’s cause for further investigation.

​​A frequently overlooked sign of dementia is stocking up on routine purchases such as toiletries or makeup, says Jared Heathman, MD, a family psychiatrist in Houston, Texas. “When out shopping, recent purchases of frequently used items are often forgotten,” he adds. “This can lead to purchasing items due to the belief that they are running low.”

Subtle personality changes are the most commonly overlooked early symptom in dementia, says Thomas C. Hammond, MD, a neurologist with Baptist Health’s Marcus Neuroscience Institute in Boca Raton, Florida. For example: When cognition declines, some people begin to isolate socially, spending less time with others. This might be easily dismissed as fatigue, busyness or distractedness by the person affected or their family members.

“Changes in mood are also a feature of early dementia that are commonly missed,” says Hammond. “The patient with early dementia will become apathetic, losing interest in activities they had formerly enjoyed. Family members often attribute these changes to the individual being depressed, anxious or under stress.”

A person with dementia may begin to have trouble expressing themselves verbally. This symptom may be subtle, not easily noticed by the person with cognitive decline or those around them, says Hammond. Words might escape them in conversation, and they might use substitutions or talk around what they can’t recall.

And to get through life at your healthiest, don’t miss The #1 Cause of Diabetes, According to Doctors.

The post Signs of Dementia Usually Ignored by Women appeared first on Eat This Not That.