Shoppers Say These Are Their Favorite Grocery Chains 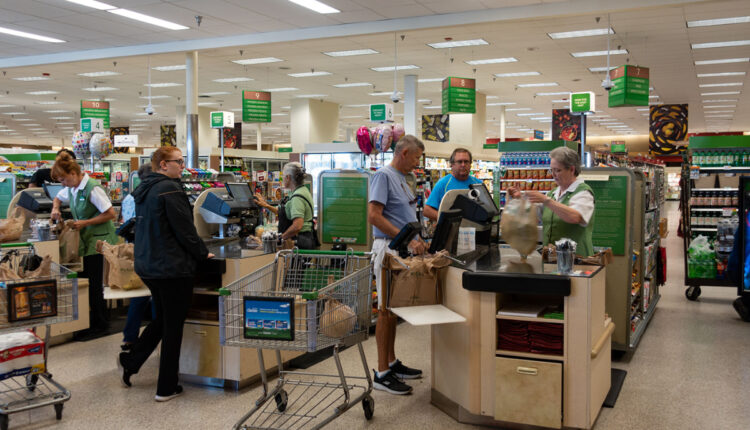 Several nationwide and local supermarkets across America are known for their incredibly loyal followings. Costco members know exactly how to save money at the warehouse, Trader Joe’s shoppers adore the exclusive items on shelves, and Wegmans fans drive for hours to shop at its locations.

With so many options to choose from across the 50 states, Eat This, Not That! set out to find which grocery store is the most popular among our audience. We recently asked readers in a survey on our social media channels the following question: “Where is your favorite place to shop for groceries?” Though some of the more than 170 respondents said “delivery” or “online,” we can now reveal their favorite brick-and-mortar stores.

First, here are the honorable mentions.

Some big-name grocery stores earned a few mentions from readers, including Costco, H-E-B, Publix, ShopRite, Sprouts, and Target. However, certain shoppers really love their regional supermarkets. Heinen’s, which has 19 locations in Chicago and Ohio, racked up a pair of shoutouts. Fresh Thyme, with stores in 10 states in the Midwest, also received two votes.

Walmart and Wegmans each scored eight votes from our readers. When you consider convenience and cost, Walmart probably isn’t a surprising answer. There’s at least one location in all 50 states, and the retailer is well-known for its low prices.

Some Americans will literally travel miles and miles to shop at Wegmans, which is a beloved regional favorite. The chain has stores in Maryland, Massachusetts, New Jersey, New York, Pennsylvania, Virginia, and North Carolina.

Speaking of the Tar Heel State, there’s recently been a huge push to bring a Wegmans to its biggest city—Charlotte. A Facebook group called “Bring Wegmans to Charlotte, NC!” currently has more than 5,000 members. There also has been a high school musical performance about the store, complete with chefs’ hats, shirts, shopping carts, and signs.

Related: To get all of the latest grocery store news delivered right to your email inbox every day, sign up for our newsletter!

Whole Foods finished in the #4 spot, raking in nearly 10 votes from our readers. The Amazon-owned chain is a health-food destination for many, despite its “whole paycheck” reputation. (FYI: Here are the 25 Best Ways to Save Money at Whole Foods.)

That being said, Whole Foods’ own 365 line of items features lots of nutritious options—but there are still some to stay away from, this registered dietitian says.

Kroger sits in the #3 spot, having scored 12 votes from our readers. In case you weren’t aware, Kroger is the largest supermarket chain in the country that exclusively sells food. Some other grocery stores are in this family of companies, including Dillons, Foods Co, Fred Meyer, Jay C Food Store, Mariano’s, QFC, Ralphs, and more.

Trader Joe’s has a super loyal fan base that loves to stock up on frozen favorites like Mandarin Orange Chicken, popular snacks like the Chili & Lime Rolled Corn Tortilla Chips or Peanut butter Filled Pretzel Nuggets, and desserts like the Dark Chocolate Peanut Butter Cups. Thus, it’s no surprise that TJ’s finished as the #2 most popular grocery store on this list, winning over 21 Eat This, Not That! readers.

The most buzzed-about grocery store chain among our readers was ALDI, which walked home with 25 votes. This low-cost supermarket’s cheap groceries and unique finds (like green bean casserole pizza) keep shoppers coming back for more.

For more on what’s happening at the grocery store in your neighborhood, check out:

The post Shoppers Say These Are Their Favorite Grocery Chains appeared first on Eat This Not That.

Eating Habits For a Flatter Stomach That Are Super Easy