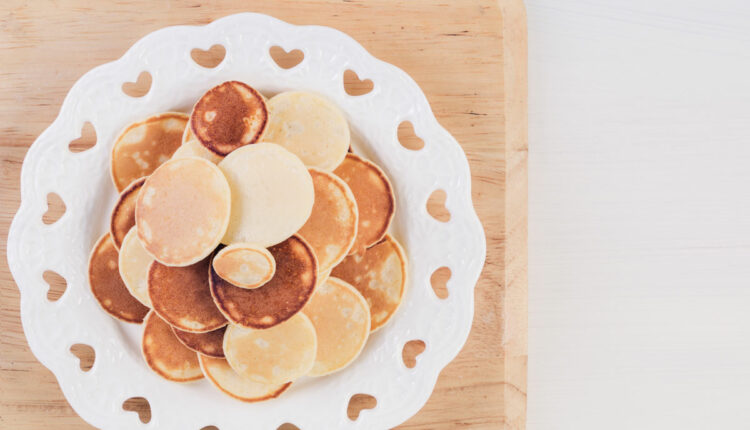 ALDI and Trader Joe’s are known and loved for their low prices and unique foods. There are over 2,500 locations of both combined in the U.S. and have lots of very loyal local shoppers. Unfortunately, though, they are not immune to supply chain issues right now. ALDI has told shoppers some new finds may not be in all stores because of shipping delays, and Trader Joe’s has put product limits on items in the past.

With shortages plaguing supermarkets from coast to coast, we at Eat This, Not That! decided to ask our social media followers which items are hard to find right now. Here’s what they said.

TJ’s fans love these bite-sized pancakes and use them for more than just breakfast—enter pancake boards—but one of our Instagram followers says they are missing from shelves right now.

This staple is a shortage people are noticing at pretty much all grocery stores, but one of our Instagram followers noted it is hard to find at Trader Joe’s right now, too.

Related: To get all the latest Trader Joe’s and ALDI news delivered right to your email inbox every day, sign up for our newsletter!

This sauce contains only organic coconut sap, water, and sea salt and is a condiment loved by many Trader Joe’s fans. Unfortunately, multiple shoppers say they can’t find it on shelves.

To our Facebook question of What shortages are you seeing at Trader Joe’s? one shopper said: “Coconut amino acid sauce. They were out, got a barbecue version only now.. Ewwwwww!” and another noted how long it’s been since it was stocked: “No Coconut Aminos for a long while…what’s up with that??”

This is another TJ’s item with a loyal following—shoppers have expressed their love for it on Reddit before.

However, one shopper in the comments of our Facebook post said they haven’t seen this frozen pizza in months.

Related: This Is the #1 Favorite Pasta at Trader Joe’s, Says Manager

The only milk featured on Trader Joe’s is the Chocolate Whole Milk made with Fair Trade Cocoa, and one shopper on Facebook says the regular whole milk has been gone for months.

This dupe of a “very popular $45 cream” is so popular there was a purchase limit of one or two placed on it in September, but shoppers say it is still missing from Trader Joe’s shelves.

Dried fruit is used in fruit cakes and other holiday recipes, but one shopper said dried apricots are missing from Trader Joe’s right now. If you’re in a bind and really need some, Amazon has a 1-pound bag for $11.50.

This isn’t the only holiday item facing a shortage right now. Things like cranberries, turkeys, apples, and more are hard to find at all grocery stores.

Stocking up on a freezer fave isn’t happening right now, according to one TJ’s shopper who commented that these are facing a shortage.

These are a Trader Joe’s staple—and being in demand can come with its issues, as per one shopper who answered our Facebook question. “[T]hey’re my favorite of course,” they said.

Related: Former Walmart CEO Says Shortages Are Unlike Anything He’s Ever Seen

We asked our Instagram followers the same shortage question, but for ALDI, and one said pumpkin is gone. This may not come as a surprise, given that last year it disappeared, too and this year is expected to be less orange as demand remains high and supply remains low.

Another ALDI shopper responded to our Instagram question and said that wings are facing a shortage at the low-cost chain right now.

While a lot of the comments on our Facebook poll asking what shortages shoppers are seeing at ALDI right now said “nothing”, one person said there were no organic eggs fairly recently. Usually, there are about three options in the store.

Like eggs, milk is reportedly currently hard to find at ALDI. Two of the low-cost chain’s shoppers said the organic and 2% varieties are gone.

To our Facebook question about the ALDI shortages, one shopper said “Quinoa!” before noting that “It’s been missing for a long time though!”

Juice products are missing from grocery stores around the country, according to consumers, and that includes at ALDI.

One said the store-brand grape juice is facing a shortage right now, and another said juices, in general, are disappearing from shelves.

If you shop for produce at ALDI you may have to look harder, according to one shopper who answered our Facebook question. They said Roma tomatoes have been gone for two weeks now. Another noticed that tomato paste and fire-roasted tomatoes were missing a little while ago.

For more info about what’s happening at the grocery store near you, check out:

These 6 Beloved Grocery Store Chains Are Opening New Locations Soon
America’s Largest Grocery Chain Just Added 6 New Items to the Freezer Section
Grocery Prices Are About to Spike 10% for the Rest of 2021, Insider Predicts
Shoppers Say These 5 Items Are More Expensive at Their Local Grocery Stores

The post Shoppers Are Seeing These 15 Shortages at Their Local ALDI and Trader Joe’s appeared first on Eat This Not That.

The #1 Way to Dine Out and Still Lose Weight, Says Expert