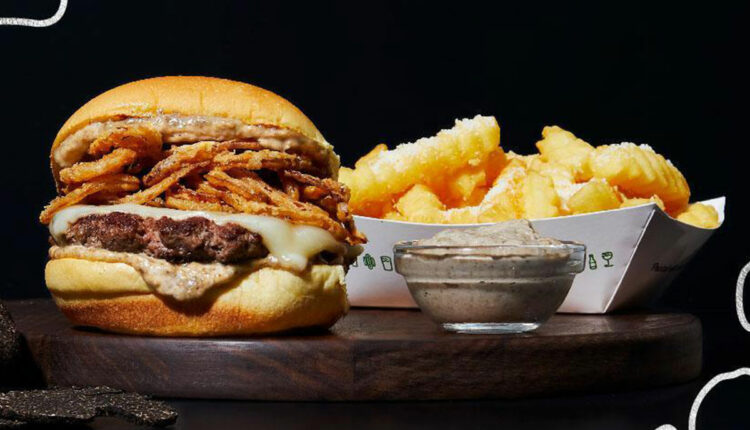 The Black Truffle Burger was only offered at a handful of locations last year (just four restaurants in New York and California) but has already garnered major buzz and rave reviews from fans and food critics alike. Robert Sietsema of Eater, for example, praised the truffle flavor in the burger’s sauce, which he characterized as “much subtler than artificial truffle oil” but stating it still “shone” through as he devoured the item. “One greasy bite and we were hooked,” he concluded almost a year ago when the very limited market test was first launched.

And now, burger aficionados across the United States will have the chance to try the Black Truffle Burger along with Parmesan Garlic Fries with Black Truffle Sauce. Both items are on the menu for a limited time from October 15 through January 10 of next year.

RELATED: Shake Shack Is Bringing Back This Beloved Menu Item

The burger is made with gruyere, crispy shallots, and Shake Shack’s black truffle sauce—the signature component of this innovation. To achieve this understated but delicious sauce, the chain has partnered with Regalis Foods, a specialty food purveyor that touts its USDA Organic Black Truffle Arbequina Oil as the only truly natural truffle product on the market.

The fries are the chain’s crinkle-cut spuds you know and love, topped with garlic cheese and served with the new truffle sauce on the side for dipping.

The burgers will sell at a starting price of $8.79, while the fries will be offered for a price of $4.79 at most locations, according to the chain’s press release.

It is worth noting that while the chain also tested a Black Truffle Shroom Burger last year, this item isn’t making an appearance on the menus this time around.

In the past, Shake Shack has had success with other unique menu items, such as the Korean-style Fried Chicken Sandwich released around the start of this year. It’s another item that drew praise for its taste but criticism as an act of cultural appropriation as well, according to Business Insider. The company has also offered limited-edition burgers ranging from a shrimp burger to a line of BBQ burgers in recent years, so this type of fine-dining experimentation is something we can very much expect them to continue doing in the future.

The post Shake Shack Just Launched These Long-Awaited New Items Nationwide appeared first on Eat This Not That.

The Final Verdict On Whether Almond or Peanut Butter is Healthier