Secret Tricks for Getting a Lean Body After 40, Science Says 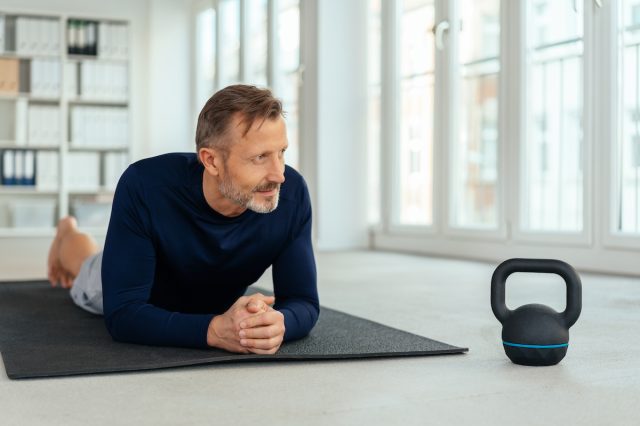 Whether your main motivator is an attractive physique or simply healthier living in general, there’s no wrong reason to pursue improved fitness at any age. In fact, while many middle-aged and older adults make the mistake of assuming exercise is reserved solely for those under the age of 40, the truth is, consistent physical activity is much more important the older we become.

For instance, according to research published in the scientific journal Neurology, a mere 10 minutes per day of exercise in middle age protects the brain against cognitive decline. “Our study suggests that getting at least an hour and 15 minutes of moderate-to-vigorous intensity physical activity a week or more during midlife may be important throughout your lifetime for promoting brain health and preserving the actual structure of your brain,” says study author Professor Priya Palta, Ph.D., of Columbia University.

If that isn’t enough motivation to start making your lean body goals a reality, consider this study published in the scientific journal Brain, Behavior, and Immunity: Scientists from Iowa State University actually discovered that excess belly fat appears to actively work against older adults’ ability to think quickly and react to situations on the fly. That’s right, besides a major self-confidence boost, building a leaner physique can also benefit your brain health.

Of course, like so much else in life, attaining that lean, toned look you’ve always wanted is often easier said than done. One recent survey of middle-aged American men even found that as many as one in three would be willing to give up watching the NFL entirely if it led to a smaller waistline!

Luckily, there are a few secret tricks that can help you get a lean body after 40. Read on to learn more, and next, don’t miss these Exercise Tricks for a Slimmer Body After 40, According to Experts.

Aim for high reps in the weight room

No fitness routine is complete without at least a few dumbbells in play, and that doesn’t change after your 40th birthday. For example, this study published in Obesity finds that combining a steady weightlifting regimen with clean eating is a superior fitness option than going with cardio exercises alone. Why? The aerobics may end up burning essential lean muscle, while resistance exercises like lifting weights or push-ups help maintain and support that same lean muscle while also promoting the loss of excess fat.

While you’re at it, focus on accomplishing more reps per set. According to James Jackson, PT, of Critical Body, a lifting routine that emphasizes high reps with low weight as opposed to a few reps with heavy weights is easier on the central nervous system and promotes a shorter recovery time—which means you can get back in the gym more often.

“If you want to sculpt a lean physique, make sure that you’re doing plenty of high rep training,” Jackson says. “Performing more repetitions per set increases your calorie expenditure and boosts your metabolism—both of which help you to drop body fat quicker. This underrated training style also induces a state of hypoxia in the muscle, which can make your physique look visibly leaner and more vascular by increasing the lactate concentration in the working muscles.”

Related: Sign up for our newsletter for the latest Mind + Body news!

Some people take to swimming as a form of exercise like a fish to water, while others may prefer staying on dry land. Even if you fall into the latter category, at least consider adding an occasional swim to your post-age-40 fitness routine.

Per Healthline, swimming is a full-body workout that helps burn calories, tone muscle, and improve balance. In other words, it’s the perfect exercise for building a slim, ripped physique. Even better, while swimming is certainly a great idea at any age, it can be particularly attractive for the middle-aged because it’s a safer option for those with pre-existing injuries, disabilities, or arthritis. Walking or running around for exercise can place a whole lot of pressure on our joints and bones as we move around, but gliding through the water with a backstroke is much easier on the aging body.

One research project published in The Journal of Rheumatology even reports that swimming helped relieve symptom severity among a group of middle-aged and older adults diagnosed with osteoporosis.

“Water exercising is an effective way to get a great workout,” comments Allen Conrad, BS, DC, CSCS of Montgomery County Chiropractic Center in Pennsylvania. “The water will reduce wear and tear on your body, but also provide additional resistance to keep your muscles working efficiently.”

Related: This Indoor Activity Can Be Just as Effective as Jogging

Stretch out with some yoga

Positions like downward-facing dog or bakasana may sound intimidating, but with a little bit of dedication, yoga can make all the difference when it comes to sculpting a lean look. One comprehensive report published in the International Journal of Behavioral Nutrition and Physical Activity reports that older adults who regularly practice yoga are in better overall shape, and enjoy superior balance, flexibility, and leg strength.

Another study published in Obesity tracked a group of obese or overweight adults as they tried out two distinct types of yoga for six months. Across the board, regardless of whether they were practicing hatha yoga or vinyasa yoga, participants saw significant pounds disappear and cardiorespiratory health improve. So, you certainly don’t need six-pack abs to succeed with a new yoga routine. Even better, yoga has been shown to promote healthier lifestyle choices all around.

Related: How Yoga Can Help You Lose Weight, According to Science

Remember, walking is exercise too

Don’t beat yourself up just because you don’t break a sweat with an intense, vigorous workout each and every day. Simple, daily activities like going for a walk are a great way to supplement more intense workouts and help build a lean body.

Research published in Preventive Medicine reports just a handful of 30-minute or longer walks a few times per week can both reduce body fat and improve overall fitness. Similarly, another study released in The European Review of Aging and Physical Activity finds walking can go a long way toward building up and then maintaining muscle size and strength among older adults.

“People think they have to start going to the gym and exercising hard to get fitter,” explains Dr. Elin Ekblom-Bak, of the Swedish School of Sport and Health Sciences in Stockholm. “But it doesn’t have to be that complicated. For most people, just being more active in daily life—taking the stairs, exiting the metro at a station early, cycling to work—is enough to benefit health since levels are so low to start with. The more you do, the better.”

Dr. Ekblom-Bak authored yet another piece of research that concluded the gym is unnecessary when it comes to improving overall cardiorespiratory fitness. Instead, just move more in general.

For more health and fitness advice, check out 3 Major Secrets to Living to 99, According to Betty White.

The post Secret Tricks for Getting a Lean Body After 40, Science Says appeared first on Eat This Not That.