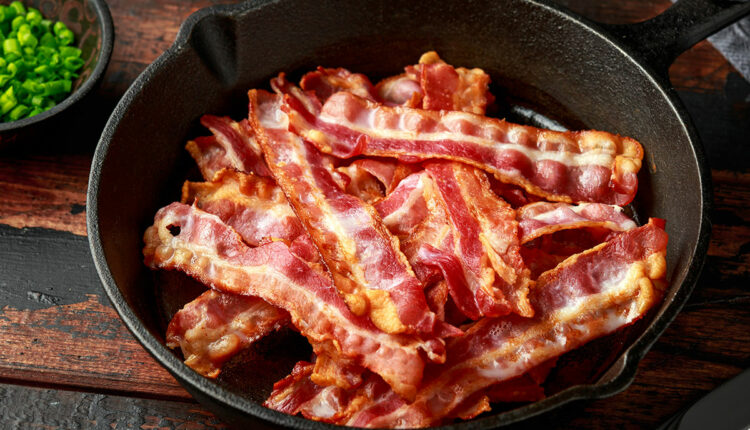 Finding out you have high blood pressure can be terrifying. After all, the condition is linked to an increased risk of heart attack and stroke, the first and fifth most common causes of death in the U.S., respectively. While genetic factors may increase your risk of developing high blood pressure, in many cases, the condition is also highly linked to a modifiable factor: your diet.

If you want to get your blood pressure into healthier territory, read on to discover which popular foods could be contributing to your hypertension risk, according to science. And if you want to make positive changes to your diet, check out The 7 Healthiest Foods to Eat Right Now.

While there are plenty of protein sources that are beneficial for your overall health, processed meats like hot dogs, bacon, sausage, and some deli meats, don’t number among them.

A 2015 study published in PLoS One found that, among patients receiving hemodialysis, processed meat intake was significantly associated with higher blood pressure due in part to the high sodium content of these products.

It’s not just salty foods that can affect your blood pressure.

A 2019 study published in Nutrients reviewed data from 128 participants between 65 and 80 years old. What the study’s researchers discovered was that, while whole fruit intake was associated with reductions in diastolic blood pressure in both men and women, added sugar was significantly linked to increases in both systolic and diastolic blood pressure, meaning your candy habit could be increasing your hypertension risk.

You don’t necessarily have to take all dairy products off your menu if you want to improve your blood pressure, but you might want to kick processed cheese to the curb.

A 2020 study published in Nutrition Journal reviewed data from a group of 40,526 French women, following them post-study for an average of 12.2 years. What the study’s researchers discovered was that, while overall dairy intake wasn’t associated with an increased risk of high blood pressure, consumption of processed cheese was positively associated with an elevated risk of hypertension.

Processed cheese isn’t the only dairy product you might want to steer clear of if you’re worried about your blood pressure, however.

A 2013 study published in Hypertension found no link between arterial stiffness and dairy consumption with one exception: butter. Instead, the study’s researchers found that diastolic blood pressure increased with butter intake, as did insulin levels and cholesterol.

Whether you’re a fan of chicken fingers, French fries, or mozzarella sticks, your taste for deep-fried food could be contributing to your high blood pressure.

A 2020 study published in Nutrition Research and Practice found that, among a group of 428 women between 20 and 57, those who consumed more fried food had higher rates of pre-hypertension and hypertension.

For more healthy living news delivered to your inbox, sign up for our newsletter!

The #1 Food Putting You at Risk of High Blood Pressure, New Study Suggests

The post Popular Foods Causing Your High Blood Pressure, Says Science appeared first on Eat This Not That.

White House Mandates Vaccine By This Date for 80 Million Americans