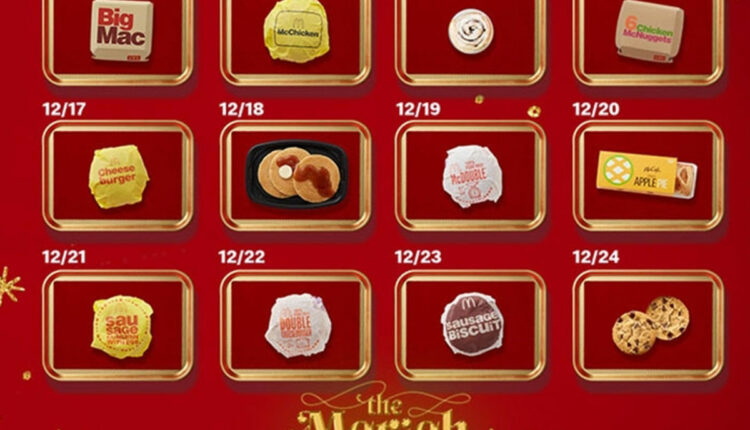 McDonald’s latest celebrity collaboration is sure to put you in a holiday mood. The chain recently announced that it will be partnering with none other than Mariah Carey for a special, 12-day giveaway event.

Mariah’s Menu kicks off December 13 and runs all the way through Christmas Eve. Once per day during the 12-day run, McDonald’s customers who spend at least $1 on the McDonald’s app will get free food. In the style of an advent calendar, each day of Mariah’s Menu will feature a new freebie item.

The highlights include free Big Macs on the 13th, free six-piece chicken McNuggets on the 16th, and free Double Cheeseburgers on the 22nd. Fans of McDonald’s baked goods and treats are also in luck. A few classic desserts will be on offer, including Apple Pie and Chocolate Chip Cookies.

The collaboration with the queen of Christmas is the chain’s fifth major celebrity partnership since 2020. The company’s catalog of famous orders already includes menu additions from megastars like Saweetie, BTS, J. Balvin, and Travis Scott.

But for Carey, who is a longtime fan of Mickey D’s, the partnership has a special significance. “Some of my favorite memories with my kids are our family trips to McDonald’s,” she said in a press release. “Bringing together some of our favorite food from McDonald’s with my all-time favorite season is a holiday wish come true.”

McDonald’s couldn’t have chosen a better pop star to headline their holiday menu. Thanks to the enduring success of her 1994 hit “All I Want For Christmas Is You” Carey and her music have become an integral part of the holiday season. As McDonald’s vice president of U.S. marketing put it: “[Mariah Carey] goes with the holidays like ketchup and fries, so we couldn’t think of a better partner to help us celebrate the upcoming season.”

Carey has recently released another holiday song—”Fall In Love at Christmas”— a collaboration with Khalid and Kirk Franklin. “All I Want for Christmas,” however, remains her holiday calling card, and Carey kicked off promotion for the song this year the very day after Halloween, sharing a video on Twitter in which she demolishes a jack-o-lantern, poses with some Christmas presents, and invites fans to help her usher in the “Mariah SZN.”

The post McDonald’s Just Announced a Major Celeb Collaboration On a Holiday Menu appeared first on Eat This Not That.