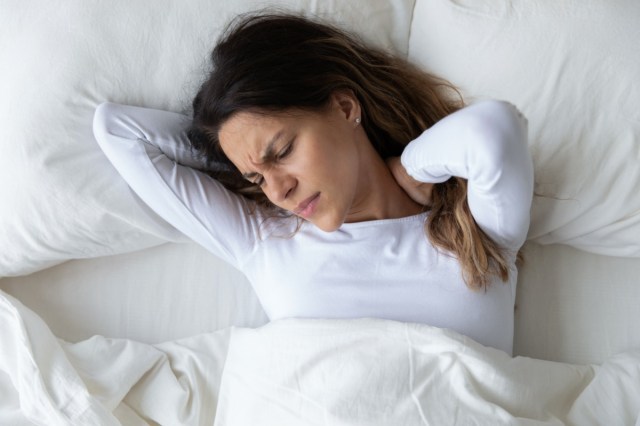 Ibuprofen first became available over the counter in 1984, and it’s developed a reputation as aspirin’s gentler, safer younger sibling. That said, like most medications, ibuprofen can have side effects. “Ibuprofen is a nonsteroidal anti-inflammatory medication that is used for both pain control and fever control,” says Kenneth Perry, MD, an emergency medicine physician in Charleston, South Carolina. “Although if taken appropriately ibuprofen is safe, chronic use can cause some long-standing health issues.” Read on to see what taking ibuprofen every day can do to your body, and to ensure your health and the health of others, don’t miss these Sure Signs You Have “Long” COVID and May Not Even Know It.

Ibuprofen Can Reduce Pain and Inflammation

Ibuprofen works by inhibiting prostaglandins, natural chemicals that “turn on” pain and inflammation in the body. Ibuprofen has been rated the safest NSAID in terms of spontaneous drug reactions, and it may be easier for some people to take than aspirin, as it requires a lower dose to work and is less likely to cause side effects like stomach irritation.

Ibuprofen May Increase Risk For Heart Attack Or Stroke

“NSAIDs such as ibuprofen have a black box warning that use may cause an increased risk of serious cardiovascular thrombotic events such as heart attacks and strokes,” says Leann Poston, MD. “Users should use the lowest dose necessary to relieve their pain, stop taking NSAIDs as soon as possible, and consult your healthcare provider if you need them longer than a week.”

Ibuprofen May Cause Headaches

Ironically, the first medication many of us turn to for a headache can cause headaches if it’s used too often. “Use of pain medications such as ibuprofen routinely to treat headaches can cause rebound headaches when the medications are discontinued,” says Poston.

“Taking ibuprofen routinely can increase blood pressure slightly,” says Poston. According to the Mayo Clinic, high blood pressure often has no symptoms; over time, if it’s left untreated, it can cause health conditions, such as heart disease.

Talk to your doctor about any other medications or supplements you’re taking with ibuprofen. “Ibuprofen interacts with many over-the-counter (OTC) herbs and supplements,” says Dr. Danielle Plummer, PharmD. “When taken with other specific medications, the active ingredient of either medication could increase, resulting in either too much of it, leading to increased adverse effects, or decrease, therefore not getting the desired effect from the medication.”

Ibuprofen Can Cause Edema

“A notable side effect of taking this NSAID daily is leg or body swelling.” says Magdalena Cadet, MD. This swelling is caused by excess fluid trapped in the body’s tissues. It’s a common side effect of NSAIDs and usually resolves when the medication is discontinued.

Ibuprofen Can Cause Gastrointestinal Issues

“If one is ingesting ibuprofen on a regular basis, the stomach loses its protective barrier and is more susceptible to injury,” says Barry Gorlitsky, MD. “Over time, this may lead to gastritis (inflammation of the stomach) or something more sinister like a gastric ulcer or perforation, which could be extremely painful, lead to bleeding and may be life-threatening.”

Ibuprofen Can Cause Kidney Damage

Never take more than the recommended dose of ibuprofen; doing so can be dangerous. “Ibuprofen, if taken inappropriately, can also cause damage to the cells of the kidney,” says  Dr. Perry. “This damage can be irreversible for some patients and require long-term dialysis.”

Ibuprofen Can Cause Liver Damage

“Your liver metabolizes everything you consume. Chronic ibuprofen can damage liver cells,” says Siddharth Tambar, MD. “Fortunately the liver can regenerate and recuperate, but if the damage is recurrent, it can eventually lead to cirrhosis.”

“Ibuprofen works by inhibiting the cyclooxygenase (COX) enzyme involved in the platelet aggregation pathway, which is important in controlling bleeding and hemostasis,” says Monisha Bhanote, MD. “Daily long-term use of ibuprofen may increase the risk of uncontrolled bleeding.” Remember it’s a good idea to talk with your doctor about all medications you take regularly. And to get through life at your healthiest, don’t miss The #1 Cause of Diabetes, According to Doctors.

The post I’m a Doctor and Warn You Know This Before Taking Ibuprofen appeared first on Eat This Not That.

The Most Iconic Desserts in America