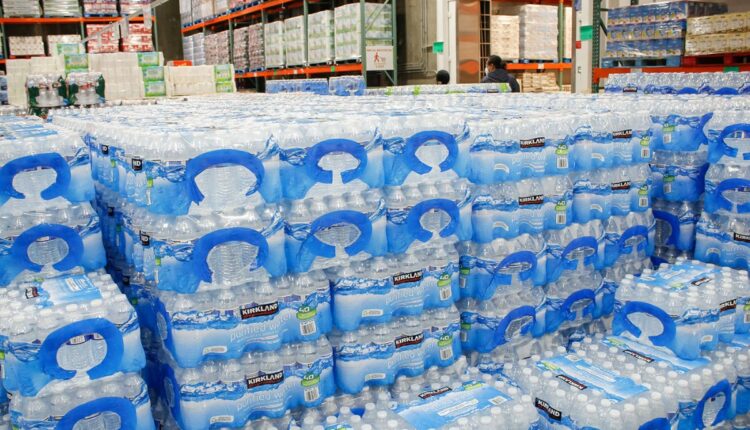 The past two years have not been a fun one for grocery shoppers, with shortages, discontinuations, changes in item sizes, and more issues affecting the most popular products. In addition to not being able to cross off everything on your grocery list, the total receipt may be more than usual thanks to price hikes at grocery stores including everyone’s favorite warehouse chain.

Costco members are already experts on the thousands of items in each location, and some just outlined which items are more expensive right now on a Reddit thread originally posted by @bitterbeerfaces. They asked which items are other shoppers noticing have increased recently, and over 50 people gave their two cents (which may be three cents now).

Related: Shoppers Are Noticing an Obvious Error on This Popular Costco Product

Water is a basic necessity but Costco members have actually noticed they have to pay more for it right now. The price for a 40 pack of Kirkland water bottles used to be $2.99, but recent reports say the price just went up to $3.19.

Even with the price hike, Costco put a purchasing limit on all water brands—members can only buy up to five cases of any type of water at a time. Unfortunately, these aren’t the only issues with the water at the warehouse members have right now. They also say the bottled water smells like “fish tank water, or lake water.” One Reddit user/Costco member said they reported the issue to the manufacturer.

In a response to the original Reddit query, one Costco member said the black plastic garbage bags used to be $15.79, but are now over $2 more. They add that they are noticing that while it is a subtle increase, most items are more expensive right now.

Ever since the pandemic started the price of meat has been sky high at all grocery stores, including Costco. User @cloverbits says they had to do “do a double take” in mid-October when they were at the warehouse buying bacon, and they aren’t alone.

Another user/Costco member, @assimplerandom echoed this, saying they usually get bacon for as low as $9.99 and now it’s double that.

And it’s not just bacon getting this treatment. Others say steaks are more expensive than ever. What used to be about $12 or $14 a pound is now $20 a pound, and Reddit user @nuee1 says they have never seen it that high.

If you’re thinking of getting seafood instead of meat to keep the total down, think again. Members in the Reddit thread report things like poke, salmon filets and burgers as well as king crab legs all cost more right now.

The diaper section in each Costco warehouse has faced several changes lately. A star was spotted on the price tag of Pampers diapers back in August, meaning that when the current supply is gone, it won’t be restocked. Around the same time the chain put Kirkland diapers on sale for $9 off, but limited the number of boxes each member could buy at once, but it will cost you more.

Reddit user @Where-ever-she-goes said boxes are up $10 right now, and others say it is wise to stock up when possible, especially when they are on sale.

And for more info about what’s happening at the warehouse in your neighborhood, read these next:

Costco Sold Multiple Items That Cost $100,000 Last Year, CFO Says
Costco May Have a Shortage of This Holiday Staple at All Stores
Costco Members Say This Hack Transforms Its Popular Bakery Item
People Are Losing It Over This Costco Frozen Pizza

The post Costco Members Say These 5 Items Are More Expensive Right Now appeared first on Eat This Not That.

Eating Habits to Avoid Before a Workout, Say Dietitians