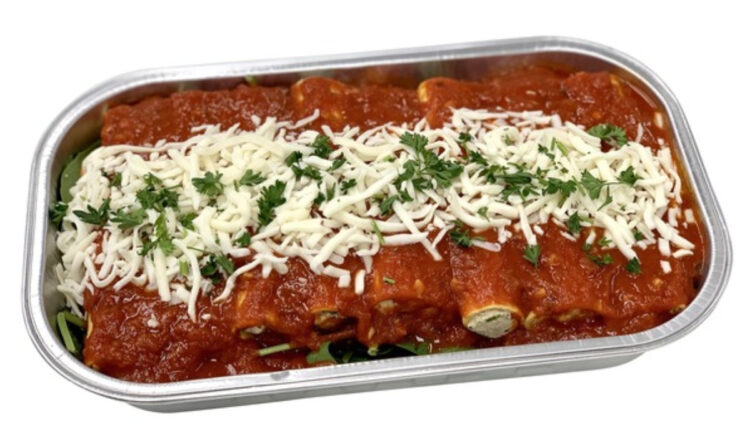 Major grocery store supply chain issues have resulted in shortages, purchase limits, and price hikes in recent weeks, and the issues have been hurting customers’ wallets. Although Costco members are seeing some supermarket staples rising in price, the warehouse chain just announced a sale on 10 “hot buys” that are in everyone’s carts right now.

These deals are available in a warehouse near you (and a few are online, too) and will be gone before you know it. Here’s what is on sale until Oct. 17.

We all already know that Costco is a great place to buy meal prepping foods, but it also offers ready-made meals like ravioli, stuffed salmon, ribs, and even Yakisoba stir fry. Add Spinach and Cheese Cannelloni with Marinara Sauce to that list, though, and take off $3 because Costco just put it on sale.

The vegetarian pasta combines spinach and cheese in a 3+ pound tray and allegedly goes well with bread—luckily a few handy hacks can completely transform one Costco carb into a delicious and flaky roll.

The meals are priced based on their weight, so you’ll have to head to the warehouse to see exactly how much members have to pay for this convenient grab-and-go option.

This is another item Costco part of this sale. According to Instacart, this vacuum-packaged boneless pork loin usually retails for about $23.66. But right now you’ll pay less than $20 as it’s $4 off.

This is a welcomed surprise since other meat selections have skyrocketed in price at Costco lately. Members have reported paying nearly double for bacon and steak in recent weeks.

Apple is one of the most popular flavors of the season right now—just take a stroll through the Costco bakery section and you’ll feel like you’re in an apple orchard. However, this version only has one ingredient (apples) and is currently $3 off in Costco’s warehouses. The savings brings the total for the 14-ounce bag to $7.49.

Costco is now selling the 64 pack of Kellogg’s Nutri Grain bars for $9.99, making it about $0.16 a bar, and this deal is also available online.

The box contains 32 strawberry, 16 blueberry, and 16 apple cinnamon bars, and there is a limit of six boxes for each transaction at the warehouse or on the website.

Related: Costco Members Refuse to Buy These 6 Items at the Warehouse

Head to the nearest Costco for this deal—over a pound of blueberries for less than $7. There’s no limit to how many packages you can buy, and lots of members say freezing the produce from the warehouse can help prevent what you don’t eat from going bad.

This is another fruit Costco just put on sale until Oct. 17. Get $1 off of golden kiwis, and enjoy the taste of summer for a little while longer before the Holidays (and their flavors) come along.

Instead of buying graham crackers, marshmallows, and chocolate separately, Costco is offering this snack mix of the three for $6.89. It’s $3 less than normal, and members can only buy five bags at a time. The campfire, unfortunately, is not included.

Life is like a box of chocolates, and if that’s true then it’s cheaper than ever and contains lots of flavors. There are eight varieties included in the Merci Finest Assortment of European Chocolates, and it’s currently $3 off (just in time for holiday shopping!). Pick one (or multiple—there’s no purchase limit) up at the warehouse only for $7.99.

Related: These Beloved Holiday Wines at ALDI Are Cheaper Than Ever

What makes Costco so popular are the prices, and this bag of chips is now even cheaper than at other grocery store chains. It’s currently $2 off in the warehouse.

This eight-pack of tuna is already a good deal for such a cheap, protein-dense food, but at $3 off it’s even more cost-effective. Members love this item, and when it’s on sale it’s hard to catch. Head to the warehouse soon before this item ends up like others that have disappeared recently.

The post Costco Just Put These 10 Popular Items on Sale appeared first on Eat This Not That.

Where to buy Filecoin as FIL registers 8% price spike