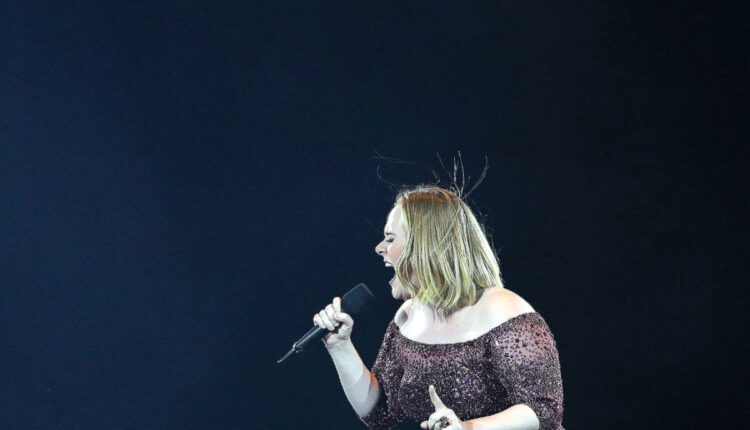 Adele never needed to lose weight to strike our awe and admiration. However, in May 2020 when she revealed a transformed physique, what surprised fans perhaps the most was that the 15-time Grammy winner had done it all on the down-low. Now, for the first time since then, she’s shared exactly how she lost 100 pounds… plus, the unexpected reason that prompted it.

Keep reading to for healthy inspiration from Adele, who’s just opened up in the new issues of U.S. and British Vogue. (Also, sign up for the Eat This, Not That! newsletter for weight loss and wellness news delivered daily.)

“It was never about losing weight.”

A successful career in the music industry comes with serious pressure, Adele said, mentioning that at one point in recent years, she even told her manager: “This isn’t really for me.”

Plus, in 2019, Adele announced that she and her then-husband, Simon Konecki, had separated. In March of this year, their divorce was finalized.

It sounds like all these factors combined spurred Adele, 33, to place a very intentional focus on her wellbeing—particularly, her mental health. Of her 100-pound weight loss, she’s reflected in the new issue of Vogue: “It was never about losing weight. It was always about becoming stronger and giving myself as much time every day without my phone. I got quite addicted to it.”

Now, she works out multiple times each day.

These days, Adele told Vogue, “I work out two or three times a day.” She said her day starts with weights, then in the afternoons she goes on a hike or does some boxing.

Many nights, she said, she does cardio. (Vogue revealed the singer is a fan of the elliptical machine.)

She also works with a trainer.

Adele credited her trainer, Gregg Miele, with her ongoing inspiration to stay active. As Vogue noted, “Adele says that she has probably spent more time with Miele in the last three years than anyone else.”

RELATED: The One Trick To Lose Weight Like Crazy, Says Celebrity Trainer

Adele did not diet.

Adele says to be clear, she didn’t restrict herself from the foods she loves. “If anything, I eat more than I used to because I work out so hard,” she said in the interview.

A favorite she still enjoys is the occasional drink… specifically, rosé or an Aperol spritz. But Adele says these days, she tries to be more mindful about her drinking than she was in her younger years.

She said Amy Winehouse’s death forced her to think about how the media would portray her if she didn’t take control of her own behaviors. “I’m not having these people I don’t know take my legacy, my story away from me, and decide what I can leave behind or what I can take with me,” Adele said.

RELATED: I’m an RD, and This Is The One Thing You Crave When You Give Up Alcohol

In Vogue, Adele said she realizes that some fans might feel differently about their connection to her—but she assures them this lifestyle change has simply been for her health. “My body’s been objectified my entire career,” she said. “It’s not just now. I understand why it’s a shock. I understand why some women especially were hurt. Visually I represented a lot of women. But I’m still the same person.”

Gordon Ramsay Shares His 4 Weight Loss Secrets That Helped Him Shed 50 Pounds
Get More Vitamin D In Your Diet With These Secret Tricks, Say Dietitians
The Best & Worst Greens to Eat—Ranked by Nutritional Benefits
7 Clean Eating Habits for Weight Loss, According to Dietitians

The post Adele Finally Reveals Her 4 Weight Loss Secrets for Shedding 100 Pounds appeared first on Eat This Not That.

I’m a Nutritionist, and This Is the Healthiest Way to Cook Oatmeal