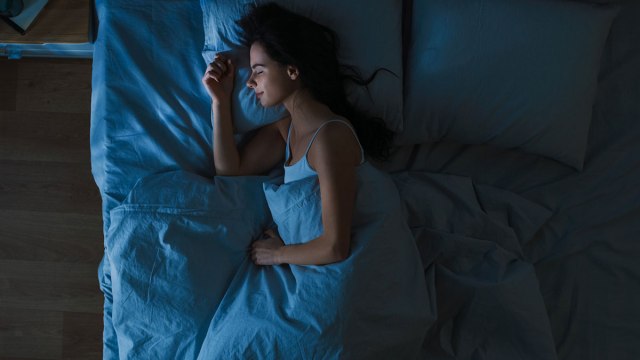 For Dr. Sanjay Gupta, the neurosurgeon and CNN chief medical correspondent, the fight against Alzheimer’s disease is personal. His grandfather developed the brain disorder when Gupta was a teenager. Unfortunately, it’s an experience that will touch more and more families in the future. The World Health Organization estimates that cases of dementia (of which Alzheimer’s is the most common type) will triple by the year 2050, as the population ages. Today, a focus for many health experts is how to prevent dementia. Gupta recently wrote a book on the subject, Keep Sharp. Here are five ways you can start preventing Alzheimer’s now. Read on—and to ensure your health and the health of others, don’t miss these Sure Signs You Have “Long” COVID and May Not Even Know It.

During sleep, the brain heals and regenerates itself. “The brain is a remarkably complicated organ,” said Gupta on CBS Sunday Morning in January. “When you go to sleep at night, it’s taking the experiences you had throughout the day and consolidating them into memory. We’re learning that the brain is constantly going through this ‘rinse cycle’ at night.” During that time, the brain clears away debris like plaques and toxins which can lead to dementia.

How much sleep do you need? “Seven to nine hours,” Gupta told NPR. “If you’re dreaming in the morning right before you wake up, that’s a pretty good sign. That probably means that you’ve spent a fair amount of your evening, your night, consolidating memories and going through the rinse cycle.”

Movement is the most important thing you can do for the brain, writes Gupta in Keep Sharp. “When you move, it’s almost like you’re signaling to the body and to the brain, ‘I want to be here. I’m not ready to go,'” he said in the Sunday Morning interview. “The brain specifically releases these things called neurotrophins. These good chemicals are sort of nourishing the brain.”

Gupta suggests asking yourself when you’re inactive throughout the day, “Do I need to be sitting right now?” If the answer is “no,” get moving. “It’s so effective in terms of what it does for the brain,” he says.

To really benefit the brain, make movement a routine. “Exercise, both aerobic and nonaerobic (strength training), is not only good for the body; it’s even better for the brain,” Gupta writes in Keep Sharp. “The connection between physical fitness and brain fitness is clear, direct, and powerful.” He suggests mixing up your routine: The brain likes doing and learning new things.

In the book, Gupta writes that what’s “good for the heart is good for the brain” and “clean living can slash your risk of developing a serious mind-destroying disorder, including Alzheimer’s disease, even if you carry genetic risk factors.” Clean living means clean eating, and that involves consuming less red meat and processed foods, more fruits and vegetables, and one brain food in particular: “Berries, in terms of what they can do for the brain and some of these certain chemicals that they release, are probably going to be one of your best foods,” said Gupta.

RELATED: Sure Signs You May Have Dementia, According to the CDC

“We know that social interaction is so critically important,” said Gupta. “We are social creatures. We know that there are certain neurochemicals that are released when we actually can touch and look someone directly in the eye.” Social interaction is a major predictor of neurogenesis, or the creation of new brain cells, which staves off dementia. And to get through life at your healthiest, don’t visit any of these 35 Places You’re Most Likely to Catch COVID.

The post 5 Ways to Prevent Alzheimer’s, Says Dr. Sanjay Gupta appeared first on Eat This Not That.

Bitcoin price falls below $32K as pullback continues- what’s next for BTC?

Over 60? Stop Ruining Your Brain By Doing This