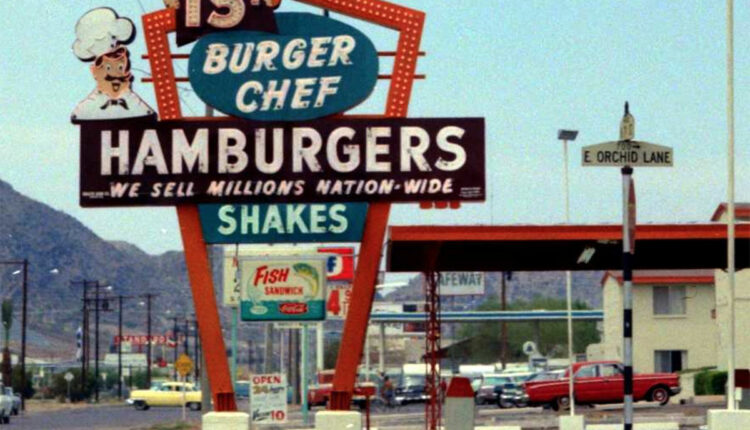 We’ve rounded up a list of nostalgic restaurants that have either gone out of business completely or have greatly reduced their operations. If you got to try these 1970s restaurants before they closed, consider yourself lucky.

There was a time when Burger Chef was the second most popular fast-food chain in America, with only McDonald’s boasting more locations throughout the United States. And children of the ’70s will remember that time well.

The Indiana-based chain served up flame-broiled burgers, such as the Big Shef, a double cheeseburger with special sauce. The chain eventually lost steam in the ’80s, with the last spot closing in 1996. Before its demise, Burger Chef was sold to the company that owns Hardee’s, where the Big Shef has been available for limited runs in past years.

Although younger generations may know of Howard Johnson’s thanks to Mad Men, ’70s kids will remember actually visiting the orange-roofed restaurant chain.

In its heyday, the chain had more than 1,000 locations, which served fried clams and a whopping 28 ice cream flavors. When Marriott acquired the company in 1979 and shut down all the company-owned spots, the franchise ones closed not long after.

Marriott claimed a few franchises in the ’80s, such as Gino’s Hamburgers, which was started in Baltimore by a pair of NFL players in 1957.

The chain’s signature hamburger was the Sirloiner, made from sirloin steak. By the mid-’70s, the chain was spread throughout the East Coast and attempting to open in the Midwest. In 1982, it was sold to Marriott, who turned most of the locations into Roy Rogers. There are still two Gino’s Burgers and Chicken locations in Maryland today.

And for more chains that didn’t stand the test of time, don’t miss these 17 Failed Chain Restaurants From the 1980s That Will Make You Feel So Nostalgic.

Another Marriott story: The famous burger chain Bob’s Big Boy merged with the corporation in 1967 (the chain had first opened in 1936 in Burbank, California). Operating together, the company had hundreds of locations throughout the United States in the ’70s. Marriott rapidly expanded the franchise through the ’80s, but under various names.

But due to various sales and franchises, the Big Boy chain has grown much smaller over the past few decades. Although the oldest-standing Bob’s Big Boy is still running in Burbank and various other locations are still open, the chain has never bounced back from its peak in the ’70s.

Founded in 1926, White Tower was long thought to be an imitator of White Castle, which was founded five years earlier. But that didn’t stop it from being a powerhouse in the early fast-food era.

While it peaked in the ’50s, White Tower was still fairly popular in the ’70s. The restaurant dished out hamburgers, and the staff members went by the nickname “Towerettes.” There’s still one White Tower location in Toledo, Ohio.

And while we’re feeling nostalgic, here are 25 Beloved Restaurants That Are Gone for Good.

Children of the ’70s will remember defunct chain Sambo’s not for the food, but for the controversial name that ultimately led to its demise. The name “Sambo’s” was allegedly used as a portmanteau of the founders’ names, but the owners inevitably decided to lean into this correlation to the book The Story of Little Black Sambo.

Images of the storybook, featuring a little boy of color, served as decorations in the store. Shockingly, the restaurant continued to grow and there were more than 1,000 spots by 1979. But as protests over the name grew, some changed names; by 1981, the company had filed for bankruptcy.

Despite the controversy, though, there’s still one Sambo’s Restaurant location left in Santa Barbara. Fortunately, the restaurant announced in June that it’s changing its name.

What started as a small hot dog stand in Florida blossomed into a company with 400 franchises in the United States, including Hawaii. The original spot was launched in the 1950s, and the chain grew based on its popular beer-steamed hot dogs, fried seafood, and frosted glass beers.

By the late ’70s, though, the company had been sold. Aside from one location in Nebraska that closed in 2017, all other Lum’s had closed by 1983.

RELATED: This 7-day smoothie diet will help you shed those last few pounds.

When it launched in 1966, Steak and Ale’s concept was revolutionary: cheap but tasty steak and an unlimited salad bar. The restaurant chain became an American favorite, thanks to dishes like Hawaiian chicken and herb-roasted prime rib.

When it became part of a larger restaurant chain in 1976, there were more than 100 locations. Ownership changed hands many times throughout the ’80s, and the company eventually went bankrupt.

Still, according to the Bennigan’s website, you can own a Steak and Ale today, so franchising opportunities may be available.

Didn’t know Walgreen’s used to have a restaurant chain? Well, then you probably weren’t a child in the ’70s or ’80s. Similar to Denny’s or Shoney’s, the family eatery was a 24-hour establishment—some were even built into the drugstore.

There were 91 freestanding locations when the chain sold to the Marriott Corporation in 1988. And when Marriott decided to sell off its restaurant business, Wag’s didn’t find an owner, and the locations all shut down in 1991.

RELATED: Learn how to harness the power of tea to lose weight.

Casual dining at its finest, VIP’s was a well-known chain in the Pacific Northwest. VIP’s opened in 1968 in Oregon and had grown to 15 restaurants by 1971. It continued to grow through the ’70s before selling over half of its 57 locations to Denny’s (which had a similar dining style).

Through the ’80s, more locations sold and it eventually fizzled out.

Shaped like an actual barn, Red Barn restaurant chains weren’t hard to spot. The fast-food chain—which offered the “Big Barney” and “Barnbuster” burgers and a self-serve salad bar—originated in Ohio in the ’60s. Although it was never as big as McDonald’s or Burger King, Red Barn is estimated to have 400 restaurants in 22 states at its peak. By the late ’70s, the chain was sold a number of times, and all closed by the late ’80s.

OK, so not every child of the ’70s will know of Pup ‘N’ Taco. But if you grew up in California, you will know it well. In addition to a variety of hot dogs, Pup ‘N’ Taco’s menu boasted tacos, tostadas, and pastrami sandwiches. Sounds like an interesting combo—but it worked.

After the first location opened in 1956, there were 102 locations by the early ’80s. The chain’s demise was because of another chain: Taco Bell, which bought all of the Pup ‘N’ Taco locations in 1984.

The fast-food chain that wanted to popularize fish and chips in the United States was founded in 1969. (The restaurant’s namesake is the English actor who played the butler in the Shirley Temple films.)

Serving up fried chicken, fish, and chips, Arthur Treacher’s peaked with more than 800 stores in the late ’70s. But after a number of sales and bankruptcies, only a handful of Arthur Treacher’s locations remain today.

All-day breakfast is one way to make people happy, and that’s what Minnesota chain Happy Chef aimed to do. The first location was opened in 1963 by three brothers. And the restaurants, with their giant happy chef greeting customers outside, grew through the Midwest to more than 60 locations.

As with many of these chains, though, interest had died down by the 1980s, in part because the chain didn’t serve alcohol. Today, only the original Happy Chef location still stands.

Fast-food chain Burger Queen began in Florida in 1956. Similar to Dairy Queen and Burger King, the restaurant served up burgers and shakes. But in 1981, all the locations changed their name to Druther’s, which was more inclusive of the fried chicken and self-serve salad bar that was also on the menu.

There were about 170 restaurants in the U.S. at that time—but 10 years later, all of those were bought out by Dairy Queen. Long live the queen.

Bressler’s Ice Cream was a popular ice cream chain in Chicago in the ’30s and ’40s, so it seemed only natural that a fast-food chain would come as an extension. Henry’s Hamburgers first opened its doors in the 1950s. And within a decade, there were more than 200 locations across America offering 10 burgers for a buck. But like many burger joints, Henry’s couldn’t keep up with the competition, and locations started closing rapidly in the late ’70s.

Today, one location remains in Michigan. So if you’re “hungry for a Henry’s,” that’s where you should go.

These restaurants don’t exist today (or if they do, they exist in a very reduced form). But for ’70s kids, they might be a nostalgic part of your childhood memories.

Read more about your favorite restaurants:

The post 16 Beloved Restaurants Only ’70s Kids Will Remember appeared first on Eat This Not That.

5 Places You’ll Most Likely Catch COVID, According to Dr. Gupta