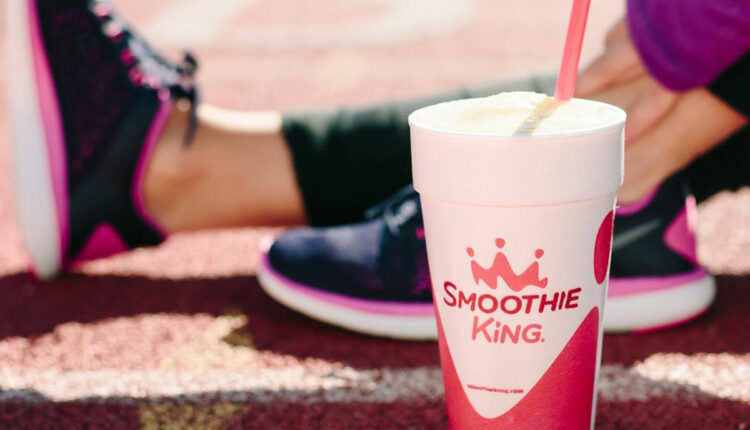 Whether you’re eating healthy or just trying to add more fruits and veggies to your diet, a cool smoothie really hits the spot. Smoothie King promises that its smoothies offer the health-maximizing benefits of natural, real fruits with 0 grams added sugars. While that sounds nice, is it really true for all of the smoothies?

When considering a smoothie, especially from a chain like Smoothie King, be aware that smoothies have the potential to be diet-busting bombs. Sugar levels in fruit and juice can boost calorie counts to shake levels, and a scoop of this and a touch of that can add calories, sugar, and sneaky fats that will turn a healthy drink into a hefty liquid meal. Here’s how to be on your guard at Smoothie King. (Plus, find out the 11 Secrets Dunkin’ Doesn’t Want You to Know.)

Stick with the Stay Slim Blends.

If you’re watching your waistline, don’t be fooled by the brand’s Take a Break blends. Almost all of them have a sneaky ingredient listed – turbinado. Don’t know it? It’s minimally processed sugar, the same as you’ll find in those Sugar in the Raw packets, and a good way to undo all the healthy aspects of a veggie and fruit drink. Every smoothie that contains turbinado has an additional 100 calories from carbohydrates and 24 grams of added sugar.

RELATED: Sign up for our newsletter for more restaurant secrets and healthy eating tips.

They use the term ‘no added sugar’ very loosely.

Smoothie King considers only sugar and sugar derivatives to be added sugar. But fruit juices can add a ton of sugar and no fiber. Case in point, the Veggie Lemon Ginger Spinach has no added sugar but it contains, mangos, pineapples, and two different juices that bring the sugar total to 60 grams for the 20-ounce smoothie and only 6 grams of fiber.

According to a post by a Reddit user claiming to be an employee, some of the fruit that goes into your smoothie is frozen, some fruit is fresh, but some also comes canned or sweetened. “The strawberries are frozen in their own syrup. We would get new ones in weekly, and they are only a few days removed from being picked,” the employee wrote. “The bananas are peeled by hand. They are left to ripen a little bit, but not too brown. The more brown the more natural sugar they have. The coconut is shredded dry coconut. The peaches and pineapple come from large industrial cans.”

RELATED: Side Effects of Eating Canned Foods Every Day, According to Science

One of their smoothies won an ‘award.’

In 2013, the Center for Science in the Public Interest cited the Peanut Power Plus Grape Smoothie in their Xtreme Eating issue. They acknowledged that the smoothie was in the ‘Indulge’ section of the menu but that it was a seriously overloaded drink nonetheless. “Do two cups of grape juice, five tablespoons of peanut butter, a banana, and a boatload of sugar sound like a healthy lunch or (heaven forbid) snack?” they asked. Smoothie King listened and removed the drink and the Indulge section from the menu and has been focusing on healthier options for years.

Stick with a small.

Sizes at Smoothie King are kind of out of hand, with a small being a 20-ounce drink, a medium 32 ounces, and a large coming in at a whopping 40 ounces. As you upgrade, calories and carbs can get out of hand fast. For example, a small Coffee High Protein Almond Mocha is 400 calories for a small and 810 for a large.

RELATED: 11 Most Fattening Smoothie Ingredients, According to Experts

While a smoothie is a nice treat and a seemingly easy way to get your fruits and vegetables, it won’t fill you up. In an April 2018 study published in Nutrients, researchers found that energy-containing liquids are less satiating than foods in a small sample size of just 28 participants. Though participants reported feelings of enjoyment of smoothies, eating a whole fruit salad was found to be more filling.

Smoothie King started due to the founder’s desire for a dairy-free milkshake.

Founded in the 1970s, Smoothie King is the result of founder Steve Kuhnau experimenting with mixing fruit, proteins, and other ingredients in a blender at home. According to Grey Journal, Kuhnau had grown up with extreme food allergies to ingredients such as dairy and had a hard time creating full meals around his allergies, and he was jealous he couldn’t drink milkshakes. So, he attempted to replicate a shake with fruit, ice, and juice, instead. As a result of drinking the smoothies often, his blood pressure came under control, so he decided to go public to help others like him. The business was sold in 2012 to Wan Kim, a franchisee from Korea who steered the company to healthier smoothies.

Depending on what you’re looking for in a smoothie, it’s good to be aware that many of the options in the Slim and Trim line have added sweeteners–specifically Stevia. Stevia is a great alternative to sugar because it doesn’t add calories and has a low glycemic index, but many experts have speculated that because artificial sweeteners don’t activate the release of satiety hormones, they may lead people to overeat at their next meal.

They make their own protein powder.

If you grab a smoothie, like the Gladiator, to recover from a workout or as a meal replacement, you’ll probably add protein powder. According to QSR Magazine The Gladiator contains Smoothie King’s proprietary protein supplement, and also is packed with Lean1, Nutrition53’s best-selling fat-burning supplement. Translation: They won’t tell you exactly what’s in it. They have a variety of protein powders so be sure to read up on them to decide if the ingredients are right for you.

RELATED: We Tested 9 Protein Powders & This One Is the Best

You can hack a low-carb smoothie.

If you’re counting carbs or eating a Paleo diet, smoothie menus can be a challenge to navigate. Luckily, Smoothie King has some great options for hacking a smoothie, such as removing the Sunwarrior Organic Vegan Protein Blend or vanilla flavor from the Vegan Dark Chocolate Banana smoothie and adding almonds, Califia Farms Almond Milk, and cold brew coffee.

The post 11 Secrets Smoothie King Doesn’t Want You to Know appeared first on Eat This Not That.

15 Foods You Should Never Buy When They’re On Sale