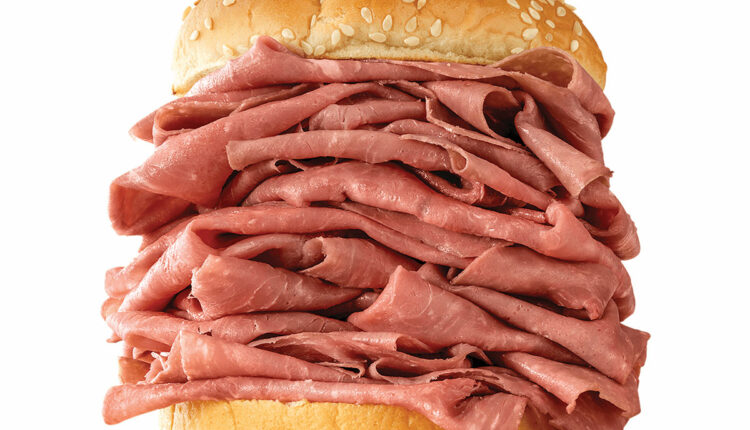 If you enjoy big beef sandwiches and tasty fried sides, you’re probably a fan of the fast-food chain Arby’s. And, as most people who love going out to eat, you might know that many restaurants have secret menu items, menu hacks, items to avoid, and even a best time to order. And the same can be said about beloved fast-food chains.

However, it’s worth noting the secrets of fast-food chains, whether it’s to save a few bucks or keep our expectations in check. Not to turn you off to your favorite takeout, but here are some secrets Arby’s probably would like to keep under wraps. Plus, if you feel like cooking, try one of these 45+ Best Healthy Copycat Restaurant Recipes.

I can personally attest to this as my first job was at an Arby’s in Nashua, New Hampshire. The hot and delicious roast beef is shipped to the franchise, unsliced, in an air-tight bag to keep it fresh. Since I worked there, they’ve changed the process though, according to Mashed – the roast beef is cooked in the bag at the franchise – instead of being pre-cooked.

Sign up for our newsletter for more fast-food news and healthy eating tips.

There isn’t anyone named Arby.

A lot of people think that Arby’s is meant to be an abbreviation of roast beef, as in “RB.” That’s not actually the case, according to reporting from the Today Show, and Arby’s very sassy Twitter account. The name is actually a nod to the Raffel Brothers, Leroy and Forrest, who founded the Georgia-based fast-food chain in 1964.

Arby’s was supposed to be upscale.

Leroy and Forrest Raffel opened Arby’s on July 23, 1964, according to Mashed. They did it at a time when fast food was new, and everyone was doing burgers, so their original menu of fresh-sliced roast beef was considered completely new.

“On the day we opened, the McDonald’s hamburger was 15 cents and our sandwich was 69 cents,” Leroy Raffel told NBC News. “So, you had to be a little more affluent to buy our sandwich.” Arby’s could be making a play to be seen as more upscale again as word has it that they are testing a burger that’s made with a blend of 52% Wagyu beef and 48% sirloin. Read more about it here: Arby’s Is Testing a Rare New Premium Item, Customers Say

People love Arby’s tweets, which are often funny, and speak in the language of the Internet. However, while you might think it’s one funny person snarking on the competition, it’s actually a whole internal team and a social media marketing agency. They’re the ones that spend days crafting the pop-culture reference heavy tweets and trolling their competitors, according to reporting in Kotaku.

There are healthy(ish) items on Arby’s menu.

You might not think you can eat a lower calorie meal at Arby’s but if you look at the chain’s nutritional information, you’ll find that the Classic Roast Beef isn’t that terrible if you’re counting calories. It’s only 360 calories and 14 grams of fat, which is pretty good for a fast-food sandwich. They’re also packed with 970 mg of sodium, which isn’t great, but it’s not the worst you can do when you’re in need of a quick lunch, either. Take a peek at The Best & Worst Menu Items at Arby’s.

Common illnesses are becoming more difficult to treat because of increased antimicrobial resistance, and the food we eat plays a major role in this phenomenon. Most top fast-food chains in the United States continue to sell beef produced with routine antibiotic use, earning them poor grades in the fifth annual Chain Reaction scorecard, according to the National Resources Defense Council. Arby’s consistently receives an F grade for the lack of transparency around antibiotics in their roast beef.

RELATED: The Unhealthiest Fast-Food Burgers on the Planet

Arby’s Angus beef, which is found in many of the chain’s entrees, contains hydrolyzed soy protein which is commonly used as a flavor enhancer because it contains MSG. The beef also contains sugar, caramel color, and yeast extract—another source of MSG. That’s two doses of MSG!

RELATED: Is MSG Actually Bad For You?

Many of the sauces contain secret sugars.

At Arby’s the only thing that comes second to the meats are the sauces. But, before you douse your sandwich in a sweet BBQ sauce, take a look at the ingredients list. Sauces like Arby-Q and Arby’s Sauce list high-fructose corn syrup as the first or second ingredient, many experts believe added sugars are a big contributor to the obesity epidemic in the US.

You can add fish to the Meat Mountain.

Stacked ridiculously high with almost all the meats, the famous sandwich normally comes with two chicken tenders, slices of roast turkey, pit-smoked ham, corned beef, 13-hour smoked brisket, USDA-choice Angus steak, roast beef, and pepper bacon. However, if that’s not quite enough food for you, go off the menu and ask for the “Denali.” Meaning, add a fried fish fillet to the sandwich – it’s certainly a choice.

They served a deer meat sandwich for one day.

Back in 2016, Arby’s created a sensation of sorts by offering a venison sandwich as a special for a few days in five states. The deer meat on a bun sold out in 15 minutes in Minnesota and was gone in 90 minutes at an Arby’s in Atlanta. On the heels of this, the chain delivered the deer meat at all 50 locations for one day only – October 1, 2017. Don’t ask for it again, it’s not available.

You can get free extras.

One thing the chain really doesn’t want you to know? You can hack their menu and customize your sandwich with free extras, all you have to do is ask. For example, according to MenuHack, you can switch the bread on any sandwich with another type of bread the restaurant offers. We strongly endorse the Classic Roast Beef on an onion roll. Speaking of onions, you can add the chain’s crispy onion tangler topping to any sandwich, for an extra oniony crunch!

The post 11 Secrets Arby’s Doesn’t Want You to Know appeared first on Eat This Not That.

If You Bought These Popular Snacks, Don’t Eat Them, USDA Warns