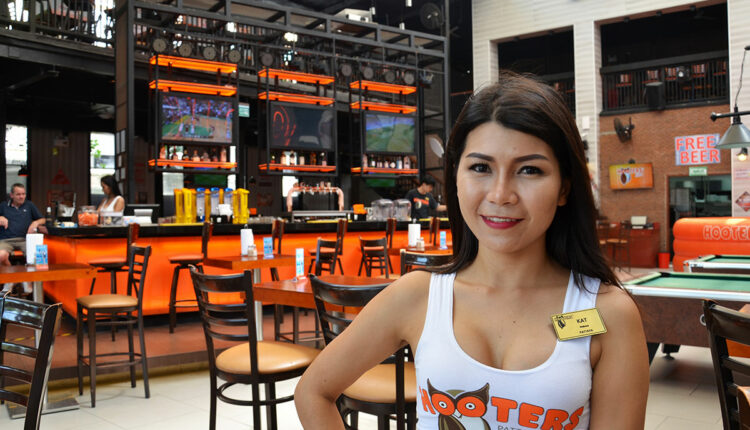 For most, Hooters is a nostalgic relic of the ’80. And even though the chain has trouble drawing in a younger audience these days, it keeps us intrigued with a plethora of operational secrets and employee handbook shockers. Here are some of the most fascinating tricks of the trade that Hooters would rather keep on the down-low.

For more, check out why Hooters waitresses hate their new uniforms.

We all know the basic premise of Hooters—patrons frequent the place for the atmosphere and “entertainment” as much as they do for the wings. And while no one expects Hooters to be the juggernaut for women’s rights, one part of the contract that Hooters restaurant employees have to sign is particularly . . . well, icky.

According to a former employee, while sexual harassment is to be reported, management expects the waitresses to tolerate a certain amount of sexual innuendo. It’s even in the contract that new hires have to sign: “I hereby acknowledge … the Hooters concept is based on female sex appeal and the work environment is one in which joking and innuendo based on female sex appeal is commonplace.”

That’s right, tolerating the ick is part of the job at Hooters.

Again, we all know that at Hooters, looks do matter when applying for a job. But how does the chain get away with discriminating based on age, gender, and appearances in their hiring process? There’s a loophole!

According to an interview with one seasoned breastaurant manager, Hooters and other chains like it don’t hire their employees as “servers” but as “entertainers,” which allows them to hire only young women and only a certain type of girl that fits the “role.” What’s the role these servers are hired to play, you may wonder? “All American Cheerleader, Surfer, Girl Next Door,” according to the employee handbook.

Hooters girls can get fired for this one shocking reason

According to a former Hooters server, waitresses can get fired based on weight gain alone. “At Hooters, we did weight pictures,” she told Cracked. “They weigh you, take pictures of you. And if they notice a change in your physique—it doesn’t matter if it’s five pounds or 20 pounds—you have 30 days to lose it, or you’re fired.”

Some of the cleavages are padded for bigger tips

While Hooters doesn’t necessarily hire servers based on their cup size, the waitresses know that their tips can largely depend on it. Former employees say this is the reason why a lot of the breasts you’ll see at Hooters are actually bras padded with all kinds of tricks to make their cleavage appear fuller.

Recently, one Hooters Girl revealed on TikTok how she turns her AA cup size into a showstopping cleavage with a combination of super-padded bras, additional inserts, as well as contouring makeup. “‘I do this solely to help my tips and help cater to my audience,” she said.

This is the chain’s harshest uniform rule

One of the harshest rules the waitresses have to follow is not showing their uniform outside of work—ever. They aren’t even allowed to leave the restaurant after their shift with their uniform showing, except for the trainers. The uniform is so sacredly tied to the Hooters restaurant that breaking this rule could cost you the job.

“You were only allowed to be seen in your uniform at the restaurant — no arriving in uniform, no leaving in uniform, and definitely no lending the uniform to friends for Halloween/costume parties. Girls actually got fired for this,” one insider said, according to Buzzfeed.

The servers want you to buy as much merch as possible

Hooters girls are instructed to push the chain’s merch on the customers, and those sales are a big part of their job success. While they don’t get commission on items sold, they can certainly get brownie points that lead to other perks like better shifts.

“We had contests to see who could sell the most Hooters gear,” said one insider. “We didn’t get commission or anything, but there were other prizes. I was so good at getting customers to buy merchandise that I’d get them to buy it for me. I had like 12 Hooters fleeces!”

Hooters Girls are not allowed to hug you—and vice versa

The Hooters employee handbook states in no uncertain terms that physical contact of any kind between staff and customers is forbidden. So while patrons are allowed to flirt with the servers, they can’t touch them. By the same token, the servers aren’t allowed to hug the customers, even in a friendly fashion.

. . . and that’s if you’re getting your picture taken with her (and you better tip well for that!).

The chain’s popularity is fading

Hooters may be popular among a certain generation, but its appeal seems to be on a decline with younger customers. For one, research has shown that Millenials simply aren’t into breasts as much as Boomers were. And for another, the whole Hooters aesthetic and branding is very much stuck in the ’80s—and not in a good way.

As a result, the number of Hooters restaurants is on a decline—the company shuttered more than 7% of them between 2012 and 2016, and in 2020, they laid off hundreds of workers in states like North Carolina, Missouri, Michigan, and Indiana.

The company itself seems to be aware that their days may be numbered and is branching out into more family-friendly concepts focused on takeout and delivery: Hoots Wings, Hootie’s Burger Bar, and Hootie’s Chicken Tenders.

Their wings are pretty unhealthy

While delicious, the chain’s wings aren’t the healthiest option out there. For one, they’re breaded and fried, which is a much less healthy option than wings without breading that are baked in the oven (like, say, the one’s served at Domino’s). Additionally, Hooters’ wings are particularly known for a very thick layer of breading which makes them bigger, heftier, and more loaded with calories.

The post 10 Secrets Hooters Doesn’t Want You To Know appeared first on Eat This Not That.

This Is the Most Stressful State in the U.S., New Data Says