#1 Worst Way to Cook Chicken Breasts, According to a Chef 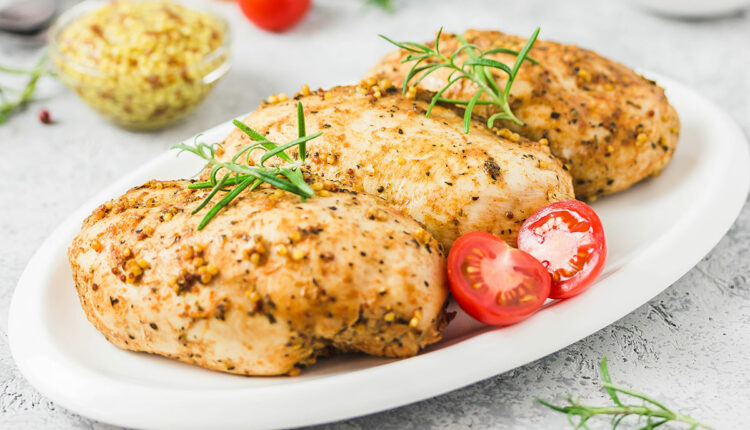 Chicken breast is one of the healthiest lean proteins you can eat. In addition to being an excellent source of protein, it is also a great source of vitamin B, vitamin D, calcium, iron, and zinc.

It certainly doesn’t hurt that, when cooked right, chicken breast is delicious and super versatile. It works as a main dish and is also a popular addition to sandwiches, salads, and soups.

Looking to perfect your chicken cooking game? We spoke with chef Yasmeen AlSawwaf about the most common mistakes people make when cooking chicken breasts, counting down to the number one absolute biggest mistake. (Be sure to come back after reading this article, to browse 33+ Best Healthy Chicken Breast Recipes for Weight Loss!)

Not properly drying and seasoning the chicken breasts before cooking.

Seasoning chicken breasts after they’ve already been cooked means that the salt and/or spices and marinades won’t stick or penetrate within the chicken. The result? A chicken that’s less flavorful and pretty bland.

What to do instead: AlSawwaf explains that seasoning chicken breasts with salt and pepper, spice rubs, or marinades prior to cooking is more effective than seasoning after it’s done cooking.

RELATED: Sign up for our newsletter for more healthy cooking tips and breaking food news.

Cooking chicken in a pan that’s cold or too small.

As AlSawwaf explains, the goal is to cook chicken with high heat quickly to lock in the moisture. If you start cooking it in a cold pan, it’ll take longer for the chicken to cook and begin browning, which causes it to dry quickly since it’s been cooked for longer than it should.

AlSawwaf adds that cooking chicken in a small pan—whether it’s cubed chicken breasts or whole ones—means the pan will be filled quickly. She describes this as “overcrowding the pan” and explains it’ll cause your chicken to boil because there’s no space for the poultry to properly brown.

“This results in bland white chicken that didn’t have the chance to experience the Maillard reaction, which is the caramelization and browning of the outer layer of a protein, adding that intense depth of flavor that we all seek when cooking,” says AlSawwaf.

What to do instead: AlSawwaf recommends a practice that’s called “conditioning the pan,” which means placing it on the stove and heating it before adding the fat.

“The amount of fat added to the pan is related to the meat you’re cooking and if it has natural marbling,” she explains. “Since chicken breast is a lean meat, we would need more fat than a marbled steak, for instance.”

Move the chicken around too much.

AlSawwaf emphasizes that the goal is to cook chicken as quickly as possible in order to lock in the moisture. Once the pan heats up, place the chicken breast presentation side down.

“Cook the presentation side until it’s nice and golden and properly browned. As it’s cooking, leave it without nudging it and allow it to golden on its own undisturbed,” she advises. Once the chicken develops that brown golden crust, it’ll release from the pan on its own and be ready to flip to the other side.

What to do instead: “When we sauté anything on a pan, we usually flip once,” AlSawwaf continues. “Flipping multiple times during the process of cooking a chicken breast will disrupt the heat of the pan, because every time you flip the meat to the other side, the pan slightly cools.” Because of this, keep the chicken breast on one side undisturbed, flip it when that one side is ready, and then continue on the other side.

To achieve the perfect results when cooking meat and poultry, AlSawwaf says the thickness of the protein needs to be equal to ensure even cooking. Therefore leaving the chicken breast bulky and thicker in one area and significantly thinner in another is a mistake because you’ll end up with uneven results. The chicken breast will be dry, overcooked, and sometimes even burned in the thinner areas and raw in the thicker areas. Doesn’t exactly sound appetizing!

What to do instead: “The best way to ensure even cooking of chicken breasts is to butterfly them or pound them into an even thickness,” says AlSawwaf. Keeping a larger chicken breast as it is and cooking it will require an extended period of time which is what causes the aforementioned issue of certain areas being overcooked or burnt and others being dry.

Cooking chicken breasts that are too cold.

“Starting off with cooking cold chicken breasts, or worse, completely frozen, is a recipe for overcooked and dried chicken breasts,” says AlSawwaf. “There is no escape, it will 100% be dry.”

By the time the heat on the pan heats up the chicken, thaws it, and then cooks it, the outer layer of the chicken will already be overcooked and dry. AlSawwaf adds that cooking frozen foods directly on the pan will increase the cooking time by 50% and requires more maintenance.

What to do instead: As mentioned earlier, AlSawwaf emphasizes that the goal is to cook chicken breasts quickly to trap in the moisture and end up with a moist, tender, and juicy chicken breast.

If you’re working with a frozen chicken breast, it’s best to let it thaw until it comes to room temperature for 30 minutes before cooking.

Overcooking chicken breasts and not allowing them to rest before slicing.

“If we followed the previous four points, we would cover all our bases to ensure that our end result is a moist and tender chicken breast,” says AlSawwaf. “Overcooking chicken breasts is the worst mistake you can make because once you overcook it, it’s impossible to fix.”

What to do instead: After cooking chicken breasts, rest them if you plan on slicing them up before serving. AlSawwaf explains that not allowing the chicken breast to properly rest would waste all your hard work trying to achieve a perfectly tender chicken breast.

“Immediately slicing it after it is done cooking [lets] all the juices that would have kept the chicken breast moist seep away, completely defeating the purpose of our efforts,” says AlSawwaf. There’s no way to bring those juices back, so being patient for at least five minutes makes all the difference.

AlSawwaf notes that it’s common to feel apprehensive when cooking chicken because we don’t want to risk undercooking it—but as a result, people often end up overcooking it. “Having a thermometer to monitor the internal temperature is a sure way to make sure that your chicken is perfectly cooked without overcooking and drying it,” says AlSawwaf. “The optimal internal temperature of chicken breasts—and all poultry breasts—should reach 170ºF.”

Here are some more ideas for cooking chicken perfectly:

The post #1 Worst Way to Cook Chicken Breasts, According to a Chef appeared first on Eat This Not That.

Drinking Habits That Are Wrecking Your Body, Say Experts